How does something sinister crawling up your leg sound? 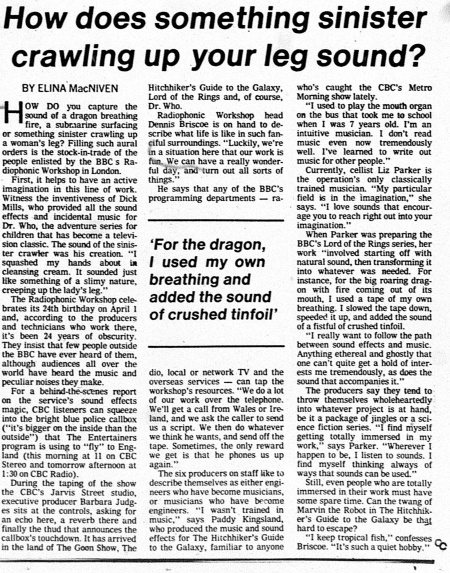 HOW DO you capture the sound of a dragon breathing fire, a submarine surfacing or something sinister crawling up a woman's leg? Filling such aural orders is the stock-in-trade of the people enlisted by the BBC's Radiophonic Workshop in London.

First, it helps to have an active imagination in this line of work. Witness the inventiveness of Dick Mills, who provided all the sound effects and incidental music for Dr. Who, the adventure series for children that has become a television classic. The sound of the sinister crawler was his creation. "I squashed my hands about in cleansing cream. It sounded just like something of a slimy nature, creeping up the lady's leg." The Radiophonic Workshop celebrates its 24th birthday on April 1 and, according to the producers and technicians who work there, it's been 24 years of obscurity. They insist that few people outside the BBC have ever heard of them, although audiences all over the world have heard the music and peculiar noises they make.

For a behind-the-scenes report on the service's sound effects magic, CBC listeners can squeeze into the bright blue police callbox ("it's bigger on the inside than the outside") that The Entertainers program is using to "fly" to England (this morning at 11 on CBC Stereo and tomorrow afternoon at 1:30 on CBC Radio).

During the taping of the show the CBC's Jarvis Street studio, executive producer Barbara Judges sits at the controls, asking for an echo here, a reverb there and finally the thud that announces the callbox's touchdown. It has arrived in the land of The Goon Show, The Hitchhiker's Guide to the Galaxy, Lord of the Rings and, of course, Dr. Who.

Radiophonic Workshop head Dennis Briscoe is on hand to describe what life is like in such fanciful surroundings. "Luckily, we're in a situation here that our work is fun. We can have a really wonderful day, and turn out all sorts of things." He says that any of the BBC's programming departments - radio, local or network TV and the overseas services - can tap the workshop's resources. "We do a lot of our work over the telephone. We'll get a call from Wales or Ireland, and we ask the caller to send us a script. We then do whatever we think he wants, and send off the tape. Sometimes, the only reward we get is that he phones us up again." The six producers on staff like to describe themselves as either engineers who have become musicians, or musicians who have become engineers. "I wasn't trained in music," says Paddy Kingsland, who produced the music and sound effects for The Hitchhiker's Guide to the Galaxy, familiar to anyone who's caught the CBC's Metro Morning show lately. "I used to play the mouth organ on the bus that took me to school when I was 7 years old. I'm an intuitive musician. I don't read music even now tremendously well. I've learned to write out music for other people." Currently, cellist Liz Parker is the operation's only classically trained musician. "My particular field is in the imagination," she says. "I love sounds that encourage you to reach right out into your imagination." When Parker was preparing the BBC's Lord of the Rings series, her work "involved starting off with natural sound, then transforming it into whatever was needed. For instance, for the big roaring dragon with fire coming out of its mouth, I used a tape of my own breathing. I slowed the tape down, speeded it up, and added the sound of a fistful of crushed tinfoil. "I really want to follow the path between sound effects and music.

Anything ethereal and ghostly that one can't quite get a hold of interests me tremendously, as does the sound that accompanies it." The producers say they tend to throw themselves wholeheartedly into whatever project is at hand, be it a package of jingles or a science fiction series. "I find myself getting totally immersed in my work," says Parker. "Wherever I happen to be, I listen to sounds. I find myself thinking always of ways that sounds can be used." Still, even people who are totally immersed in their work must have some spare time. Can the twang of Marvin the Robot in The Hitchhiker's Guide to the Galaxy be that hard to escape? "I keep tropical fish," confesses Briscoe. "It's such a quiet hobby."