How good are the new Grange Hill and the new Dr. Who? 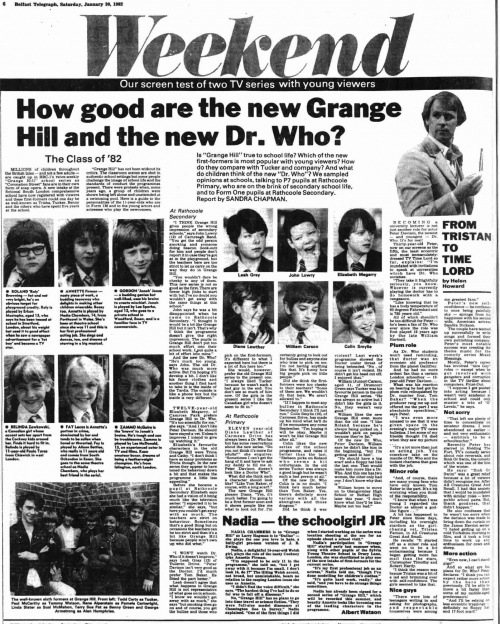 Our screen test of two TV series with young viewers

How good are the new Grange Hill and the new Dr. Who?

And the new Dr. Who? "He's much too young," says John. The old Dr. Who was much more active. But of hoping like develop a bit. I don't like his fancy clothes and another thing I find hard to take in is the inside of the Tardis. The outside is like phone box but the inside a very different.

TWELVE-year-old Elisabeth Megarry, of Camross Park prefers Grange Hill to Dr. Who. "It's too scientific for me," she says. "And I don't like Peter Davison. He should have stayed a vet. Unless it improves I intend to give up watching it."

"I WON'T watch Dr. Who if it doesn't improve," says Leah Gray (12) of Tullevin Drive. "Peter Davison isn't very good as the Doctor. I'd much prefer Tom Baker. He fitted the part better."

ELEVEN year-old Diane Lawther of Carmeen Drive has always been a Dr. Who fan but has some reservations about the new series. "Do you not think it's more for adults?" she enquires. "Sometimes I can't get the hang of it and have to ask my daddy to fill me in. Peter Davison doesn't look like a Doctor Who".

What did she think such a character should look like? "Like Tom Baker, of course, with a long scarf."

Of the new Dr. Who Colin is in no doubt. "I think he's much better than Tom Baker. Yes, there's definitely more variety with all the aborigines and those dragons.

Did he think it was violent? Last week's programme showed the Doctor under threat of being beheaded. "No, of course it isn't violent. He didn't get his head cut off. I enjoyed that."

Of the new Dr. Who, Peter Davison, William says he didn't like him in the beginning, "but I'm getting used to him".

"He should have a big scarf and a floppy hat like the last one. That would make him more like a Dr. Who. And this one has two women, the other only had one. I don't know why that is."

From Tristan To Time Lord

BECOMING a university lecturer is not just another role for actor Peter Davison, the newest - and youngest - Dr. Who. It's for real!

Thirty-year-old Peter, now on our screens as the fifth, the least eccentric and most immaculately-dressed TV Time Lord is far, explains: "I'm inundated with invitations to speak at Dr. Who societies.

"They take it frightfully seriously, you know. Whoever is currently playing the doctor has to do homework with a vengeance.

"Like knowing that he has a body temperature of 60 degrees Fahrenheit and is 750 years old."

All of which shouldn't be too difficult for Peter - he's been a fan of Dr. Who ever since the role was first played 18 years ago by the late William Hartnell.

As Dr Who students won't need reminding, that doctor was an eccentric old professor from the planet Gallifrey. And he had no more ardent fan then a certain London schoolboy - 12-year-old Peter Davison ...

What was his reaction on hearing he had got the plum role relinquished by Dr number four, Tom Baker. "When the producer rang or up and offered me the part I so absolutely speechless," says Peter.

"I was even more amazed to me that it was given space in the evening's major TV news bulletin. I bet some of my friends thought I'd died when they saw my picture ...

"It's a lot more than just an acting job. You somehow take on the mantle of Dr. Who and the instant charisma that goes with the Job.

"And, of nurse, there are many young fans who have only known Tom Baker in the part. It's a bit worrying when you think of the responsibility.

"I know that when I was young I regarded the Doctor as almost a godlike figure ..."

A lot has happened to Peter since those days, including his overnight stardom as the girl-chasing vet, Tristan Farnon, in All Creature Great And Small.

He recalls: "It started off as a minor role and went on to be a bit embarrassing because I began getting more fan mail than the stars, Christopher Timothy and Robert Hardy.

"I think the reason was because Tristan was bit of a lad and brimming with self-confidence. The girls seemed to like that.

"There were lots of teenagers writing in and asking for photographs, and respectable1 housewives were among my greatest fans.

Peter's new self-confidence -- he confesses to once being painfully shy -- springs from his happiness with his second wife, American actress Sandra Dickson.

The couple has teamed up successfully to write songs and formed their own publishing company. Peter's most notable success was creating the theme music for the comedy series Mixed Blessings.

Mostly, Peter's career has involved "nice guy" roles -- except when he got involved gangsters and corruption in the TV thriller about computers, Print-Out.

"I suppose I got pushed into acting because I wasn't very academic at school and could only muster a trio of 'O' Levels," he says.

"That left me plenty of time to concentrate on amateur drama. I soon abandoned an earlier -- and not very enthusiastic -- ambition to be a schoolteacher.

Recently Peter has starred in Holding The Fort, TV's comedy series about role reversals, and Sink Or Swim, the comedy which was one of the hits of the winter.

He says: "Sink Or Swim" was a great relief because a lot of viewers didn't recognise me. After All Creatures Great And Small, I had this anxiety that I would be inundated with similar roles -- keen public school parts. But, thank goodness, that didn't happen."

He also confesses that he wasn't, too sorry when the decision was made to bring down the curtain on the James Herriot series. "I hated getting up on a cold Yorkshire morning to film, and it took a long time to work up any enthusiasm for cows and sheep.

And so what are his plans for Dr. Who? Peter declares: "I think you can expect rather more action by the hero than previously. I'll be able to move a bit faster than some of my predecessors!"

"And I'll be relying on less eccentric trappings -- definitely no floppy hat and 17-foot scarf."