How long before the Daleks are Ma-leks? 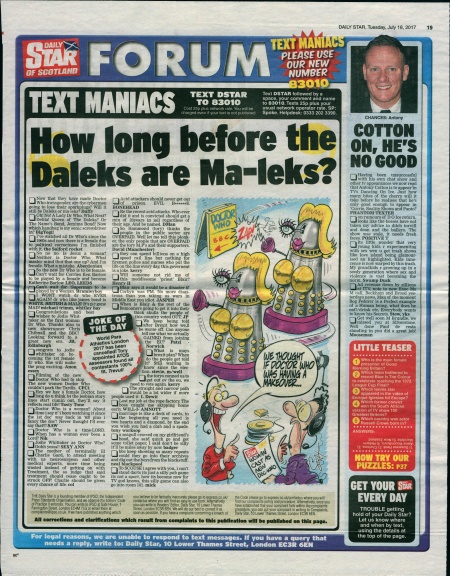 ❑Now that they have made Doctor Who transgender, are the cybermen going to lose their sparkplugs? Will it still be Daleks or ma-leks? Duffy

❑Oh! No! A Lady Dr Who. What Next? Delila! Queen of The Daleks? Or The Name's Bond, Jemima Bond! Now which handbag is my sonic screwdriver in? BigYogi!

❑I've watched all Dr Who's since the1960s and now there is a female due to political correctness I'm finished with it. the Salford rocket

❑No no no. Is Jesus a woman? Neither is Doctor Who. What master mind thot that one up? And I'm female. What a mistake. Aberdonian

❑So the new Dr Who is to be female. Can't wait for Corries Ken Barlow to be played by a female and become Katherine Barlow. LEO, LEEDS

❑Can't wait for Superman to be played by a Woman. Bramleyboy

❑Congratulations and bestwishes to Jodie Whittaker as the first woman Dr Who. Thanks also to new showrunner Chris Chibnall and the BBC! Looking forward to a great new era. JB, Edinburgh

❑congrats to Jodie whittaker on becoming the 1st female dr who. She will make the prog exciting. Anon essex

❑Filming of the new Doctor Who had to stop. The new women Doctor couldn't park the Tardis. CFC1

❑Hey we hav a female Doctor, how long do u think b4 the lesbian story lines start cumin out, they'll say it reflects real life! Tasty Tone

❑Doctor Who is a woman!! About time i say n' i been watching it since the 1st doc' way back in '63! plus i fancy the doc'! Never thought I'd ever say that!!! SAW

❑Doctor Who is a time-LORD. When has a woman ever been a Lord? Nik