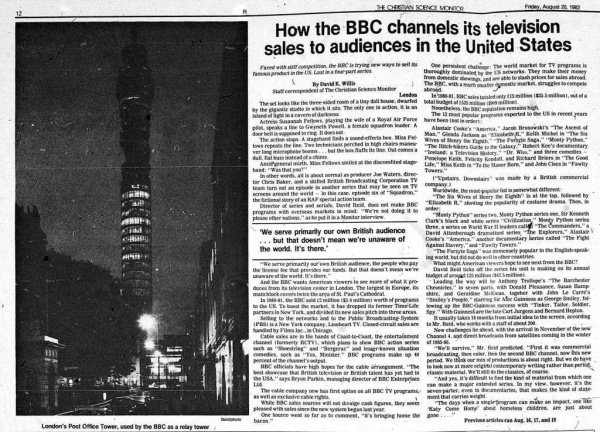 The set looks like the three-sided room of a tiny doll house, dwarfed by the gigantic studio in which it sits. The only one in action, it is an island of light in a cavern of darkness

Actress Susannah Fellows, playing the wife of a Royal Air Force pilot, speaks a line to Gwyneth Powell, a female squadron leader. A door bell is supposed to ring. It does not

The action stops. A stagehand finds a sound-effects box. Miss Fellows repeats the line. Two technicians perched in high chairs maneuver long microphone booms ... but the box fluffs its line. Out comes a dull, flat buzz instead of a chime

Amid general mirth, Miss Fellows smiles at the discomfited stage-hand: "Was that you?'

In other words, all is about normal as producer Joe Waters, director Chris Baker, and a skilled British Broadcasting Corporation TV team turn out an episode in another series that may be seen on TV screens around the world - in this case, episode six of "Squadron," the fictional story of an RAF special action team

Director of series and serials, David Reid, does not make BBC programs with overseas markets in mind: "We're not doing it to please other nations," as he put it in a Monitor interview

"We serve primarily our own British audience, the people who pay the license fee that provides our funds. But that doesn't mean we're unaware of the world. It's there.'

And the BBC wants American viewers to see more of what it produces from its television center in London. The largest in Europe, its main block covers twice the area of St. Paul's Cathedral

In 1980-81, the BBC sold £2 million ($3.4 million) worth of programs to the US. To boost the market, it has dropped its former Time-Life partners in New York, and divided its new sales pitch into three areas

Selling to the networks and to the Public Broadcasting System (PBS) is a New York company, Lionheart TV. Closed-circuit sales are handled by Films Inc., in Chicago

Cable sales are in the hands of Coast-to-Coast, the entertainment channel (formerly RCTV), which plans to show BBC action series such as "Shoestring" and "Bergerac" and lesser-known situation comedies, such as "Yes, Minister." BBC programs make up 40 percent of the channel's output

BBC officials have high hopes for the cable arrangement. "The best showcase that British television or British talent has yet had in the USA," says Bryon Parkin, managing director of BBC Enterprises Ltd.

The cable company now has first option on all BBC TV programs, as well as exclusive cable rights

While BBC sales sources will not divulge cash figures, they seem pleased with sales since the new system began last year

One source went so far as to comment, "it's bringing home the bacon.'

One persistent challenge: The world market for TV programs is thoroughly dominated by the US networks. They make their money from domestic showings, and are able to slash prices for sales abroad. The BBC, with a much smaller domestic market, struggles to compete abroad.

Alastair Cooke's "America," Jacob Bronowski's "The Ascent of Man," Glenda Jackson as "Elizabeth R," Keith Michel in "The Six Wives of Henry the Eighth," "The Forsyte Saga," "Monty Python," "The Hitch-hikers Guide to the Galaxy," Robert Kee's documentary "Ireland: a Television History," "Dr. Who," and three comedies -Penelope Keith, Felicity Kendall, and Richard Briers in "The Good Life," Miss Keith in "To the Manor Born," and John Clees in "Fawlty Towers.'

("Upstairs, Downstairs" was made by a British commercial company.)

"The Six Wives of Henry the Eighth" is at the top, followed by "Elizabeth R," showing the popularity of costume drama. Then, in order

"The Forsyte Saga" was immensely popular in the English-speaking world, but did not do well in other countries

What might American viewers hope to see next from the BBC

David Reid ticks off the series his unit is making on its annual budget of around £25 million ($42.5 million).

It usually takes 18 months from initial idea to the screen, according to Mr. Reid, who works with a staff of about 200

New challenges lie ahead, with the arrival in November of the new Channel 4, and direct broadcasts from satellites coming in the winter of 1985-86

"We'll survive," Mr. Reid predicted. "First it was commercial broadcasting, then color, then the second BBC channel, now this new period. We think our mix of productions is about right. But we do have to look now at more original contemporary writing rather than period, classic material. We'll still do the classics, of course

"And yes, it's difficult to find the kind of material from which one can make a major extended series. In my view, however, it's the seven-parter, even in documentaries, that makes the kind of statement that carries weight

"The days when a single program can make an impact, one like 'Katy Come Home' about homeless children, are just about gone ... .'