I'm Jacking It In for the Doc 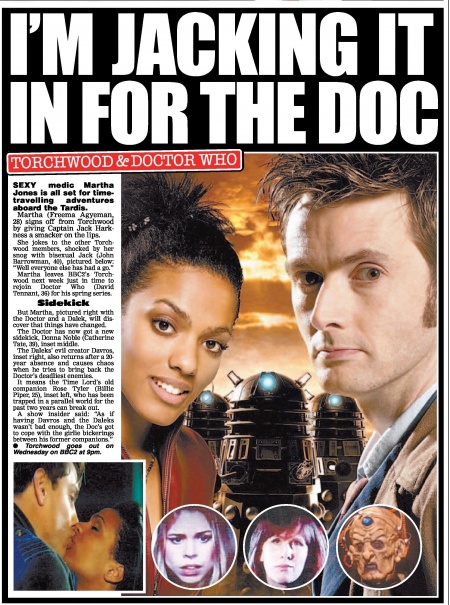 SEXY medic Martha Jones is all set for time-travelling adventures aboard the Tardis.

Martha (Freema Agyeman, 28) signs off from Torchwood by giving Captain Jack Harkness a smacker on the lips.

She jokes to the other Torchwood members, shocked by her snog with bisexual Jack (John Barrowman, 40), pictured below: "Well everyone else has had a go." Martha leaves BBC2's Torchwood next week just in time to rejoin Doctor Who (David Tennant, 36) for his spring series.

But Martha, pictured right with the Doctor and a Dalek, will discover that things have changed. The Doctor has now got a new sidekick, Donna Noble (Catherine Tate, 39), inset middle.

The Daleks' evil creator Davros, inset right, also returns after a 20-year absence and causes chaos when he tries to bring back the Doctor's deadliest enemies.

It means the Time Lord's old companion Rose Tyler (Billie Piper, 25), inset left, who has been trapped in a parallel world for the past two years can break out.

A show insider said: "As if having Davros and the Daleks wasn't bad enough, the Doc's got to cope with the girlie bickerings between his former companions."

Torchwood goes out on Wednesday on BBC2 at 9pm.