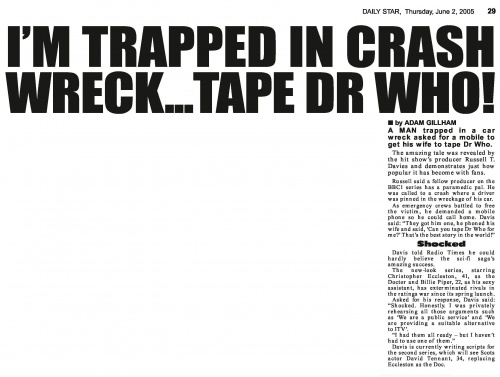 A MAN trapped in a car wreck asked for a mobile to get his wife to tape Dr Who.

The amazing tale was revealed by the hit show's producer Russell T. Davies and demonstrates just how popular it has become with fans.

Russell said a fellow producer on the BBC1 series has a paramedic pal. He was called to a crash where a driver was pinned in the wreckage of his car.

As emergency crews battled to free the victim, he demanded a mobile phone so he could call home. Davis said: "They got him one, he phoned his wife and said, 'Can you tape Dr Who for me?' That's the best story in the world!"

The new-look series, starring Christopher Eccleston, 41, as the Doctor and Billie Piper, 22, as his sexy assistant, has exterminated rivals in the ratings war since its spring launch.

Asked for his response, Davis said: "Shocked. Honestly. I was privately rehearsing all those arguments such as 'We are a public service' and 'We are providing a suitable alternative to ITV'.

Davis is currently writing scripts for the second series, which will see Scots actor David Tennant, 34, replacing Eccleston as the Doc.