ITV can expect a jolt when the BBC launches its 'Dr. Who' 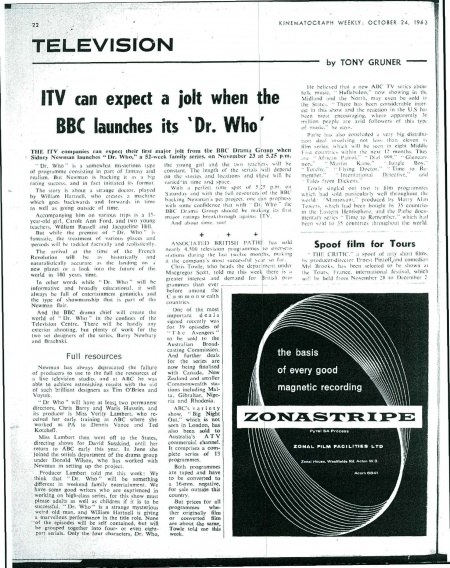 THE ITV companies can expect their first major jolt from the BBC Drama Group when Sidney Newman launches "Dr. Who," a 52-week family series, on November 23 at 5.25 p.m.

"Dr. Who" is a somewhat mysterious type of programme consisting in part of fantasy and realism, But Newman is backing it as a big rating success, and in fact initiated its format.

The story is about a strange doctor, played by William Hartnell, who creates a machine which goes backwards and forward, in time as well as going outside of time.

But while the premise of "Dr. Who" is fantastic, the treatment of various places and periods will be tackled factually and realistically.

The arrival at the time of the French Revolution will be as historically and naturalistically accurate as the landing on a new planet or a look into the future of the world in 100 years time.

In other words while "Dr. Who" will be informative and broadly educational, it will always be full of entertainment gimmicks and the type of showmanship that is part of the Newman flair.

And the BBC drama chief will create the world of "Dr. Who" in the confines of the Television Centre. There will be hardly any exterior shooting, but plenty of work for the two set designers of the series, Barry Newbury and Brachaki.

Newman has always deprecated the failure of producers to use to the full the resources of a live television studio, and at ABC he was able to achieve astonishing result% with the aid of such brilliant designers as Tim O'Brien and Voytek.

"Dr Who" will have at least, two permanent directors, Chris Barry and Waris Hussein, and its producer is Miss Verity Lambert, who received her early training at ABC where she worked as PA to Dennis Vance and Ted Kotoheff.

Miss Lambert then went off to the States, directing shows for David Susskind, until her return to ABC early this year. In June she joined the serials department of the drama group under Donald Wilson, who has worked with Newman in setting up the project.

Producer Lambert told me this week: We think that "Dr. Who" will be something different in weekend family entertainment. We have some good writers who are experienced in working on high-class series, for this show must please adults as well as children if it is to be successful. "Dr. Who" is a strange mysterious weird old man, and William Hartnell is giving a marvellous performance in the title role. None of the episodes will be self contained, but will be grouped together into four or even eight-part serials. Only the four characters, Dr. Who, the young girl and the two teachers will be constant. The length of the serials will depend on the stories and locations and these will be varied in time and space.

With a perfect time spot of 5.25 p.m. on Saturday and with the full resources of the BBC hacking Newman's pet project, one can prophesy with some confidence that with "Dr Who" the BBC Drama Group should be making its first major ratings breakthrough against TV.

And about time, too.