I Thought You Were Dead 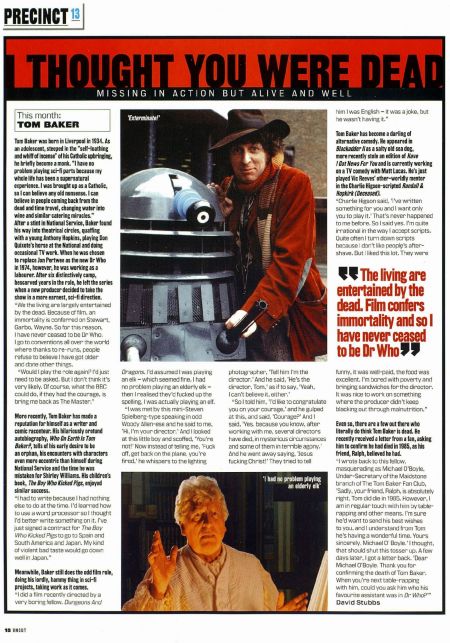 Missing action but alive and well

Tom Baker was born in Liverpool in 1934. As an adolescent, steeped in the "self-loathing and whiff of incense" of his Catholic upbringing, he briefly become a monk. "I have no problem playing sci-fi parts because my whole life has been a supernatural experience. I was brought up as a Catholic, so I can believe any old nonsense. I can believe in people coming back from the dead and time travel, changing water into wine and similar catering miracles." After a stint in National Service, Baker found his way into theatrical circles, quaffing with a young Anthony Hopkins, playing Don Quixote's horse at the National and doing occasional TV work. When he was chosen to replace Jon Pertwee as the new Dr Who in 1974, however, he was working as a labourer. After six distinctively camp, bescarved years in the role, he left the series when a new producer decided to take the show in a more earnest, sci-fi direction.

"We the living are largely entertained by the dead. Because of film, an immortality is conferred on Stewart. Garbo, Wayne. So for this reason, I have never ceased to be Dr Who. I go to conventions all over the world where thanks to re-runs, people refuse to believe I have got older and done other things.

"Would I play the role again? I'd just need to be asked. But I don't think it's very likely. Of course, what the BBC could do, if they had the courage, is bring me back as The Master."

More recently, Tom Baker has made a reputation for himself as a writer and comic raconteur. His hilariously orotund autobiography, Who On Earth Is Tom Baker?, tells of his early desire to be an orphan, his encounters with characters even more eccentric than himself during National Service and the time he was mistaken for Shirley Williams. His children's book, The Boy Who Kicked Pigs, enjoyed similar success.

"I had to write because I had nothing else to do at the time. I'd learned how to use a word processor so I thought I'd better write something on it. I've just signed a contract for The Boy Who Kicked Pigs to go to Spain and South America and Japan. My kind of violent bad taste would go down well in Japan."

"I did a film recently directed by a very boring fellow, Dungeons And Dragons. I'd assumed I was playing an elk - which seemed fine. I had no problem playing an elderly elk then I realised they'd fucked up the spelling, I was actually playing an elf.

"I was met by this mini-Steven Spielberg-type speaking in odd Woody Allen-ese and he said to me, 'Hi, I'm your director.' And I looked at this little boy and scoffed, 'You're not!' Now instead of telling me, 'Fuck off, get back on the plane, you're fired,' he whispers to the lighting photographer, Tell him I'm the director.' And he said, 'He's the director, Tom,' as if to say, 'Yeah, I can't believe it, either.'

"So I told him, 'I'd like to congratulate you on your courage,' and he gulped at this, and said. 'Courage?' And I said, 'Yes. because you know, after working with me, several directors have died, in mysterious circumstances and some of them in terrible agony.' And he went away saying, 'Jesus fucking Christ!' They tried to tell him I was English - it was a joke, but he wasn't having it."

Tom Baker has become a darling of alternative comedy. He appeared in Blackadder II as a salty old sea dog, more recently stole an edition of Nave I Not News For You and is currently working on a TV comedy with Matt Lucas. He's just played Vic Reeves' other-worldly mentor in the Charlie Higson-scripted Randall & Hopkirk (Deceased).

"Charlie Higson said, 'I've written something for you and I want only you to play it,' That's never happened to me before. So I said yes. I'm quite irrational in the way I accept scripts. Quite often I turn down scripts because I don't like people's aftershave. But I liked this lot. They were funny, it was well-paid, the food was excellent. I'm bored with poverty and bringing sandwiches for the director. It was nice to work on something where the producer didn't keep blacking out through malnutrition."

Even so, there are a few out there who literally do think Tom Baker is dead. He recently received a letter from a fan, asking him to confirm he had died in 1985, as his friend, Ralph, believed he had.

I wrote back to this fellow masquerading as Michael O'Boyle, Under-Secretary of the Maidstone branch of The Tom Baker Fan Club, 'Sadly, your friend, Ralph, is absolutely right, Tom did die in 1985. However, I am in regular touch with him by table-rapping and other means. I'm sure he'd want to send his best wishes to you, and I understand from Tom he's having a wonderful time. Yours sincerely. Michael O' Boyle,' I thought. that should shut this tosser up. A few days later, I got a letter back. 'Dear Michael O'Boyle. Thank you for confirming the death of Tom Baker. When you're next table-rapping with him, could you ask him who his favourite assistant was in Dr Who?'"