I Wanted to Exterminate the Daleks 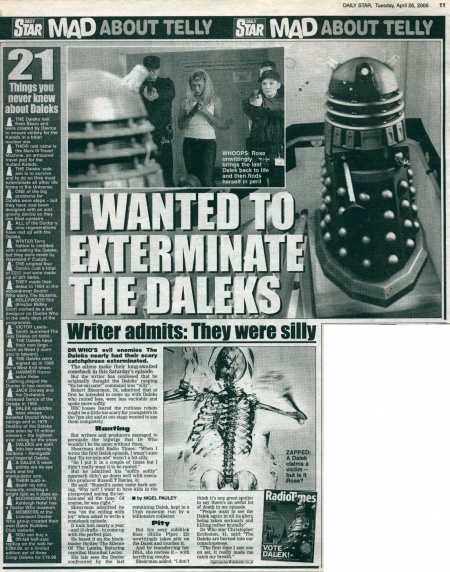 DR WHO'S evil enemies The Daleks nearly had their scary catchphrase exterminated.

The aliens make their long-awaited comeback in this Saturday's episode. But the writer has confessed that he originally thought the Daleks' rasping "Ex-ter-mi-nate!" command was "silly".

Robert Shearman, 34, admitted that at first he intended to come up with Daleks who ranted less, were less excitable and spoke more softly.

BBC bosses feared the ruthless robots might be a little too scary for youngsters in the 7pm slot and at one stage wanted to axe them completely.

But writers and producers managed to persuade the bigwigs that Dr Who wouldn't be the same without them. Shearman told Radio Times: "When I wrote the first Dalek episode, I wasn't sure that 'Ex-ter-min-ate!' wasn't a bit silly. "So I put it in a couple of times but I didn't really want it to be ranted."

He .said: "Russell's notes came back saying, 'Why not? I want to have kids in the playground saying Ex-ter-min-ate! all the time.' Of course, he was right." Shearman admitted he was "on the ceiling with joy" when asked to write a comeback episode.

It took him nearly a year - and 15 drafts - to come up with the perfect plot.

He based it on the blockbuster thriller The Silence Of The Lambs, featuring cannibal Hannibal Lecter.

His tale sees the Doctor confronted by the last remaining Dalek, kept in a Utah museum run by a billionaire collector.

But his sexy sidekick Rose (Billie Piper, 22) unwittingly takes pity on the Dalek and touches it.

And by transferring her DNA, she revives it - with terrifying results.

Shearman added: "I don't think it's any great spoiler to say there's an awful lot of death in my episode. "People want to see the Dalek again in all its glory, being taken seriously and killing rather brutally"

Dr Who star Christopher Eccleston, 41, said: "The Daleks are burned into our consciousness.

"The first time I saw one on set, it really made me catch my breath."

Caption: Writer admits: They were silly

Caption: WHOOPS: Rose unwittingly brings the last Dalek back to life and then finds herself in peril

21 Things you never knew about Daleks