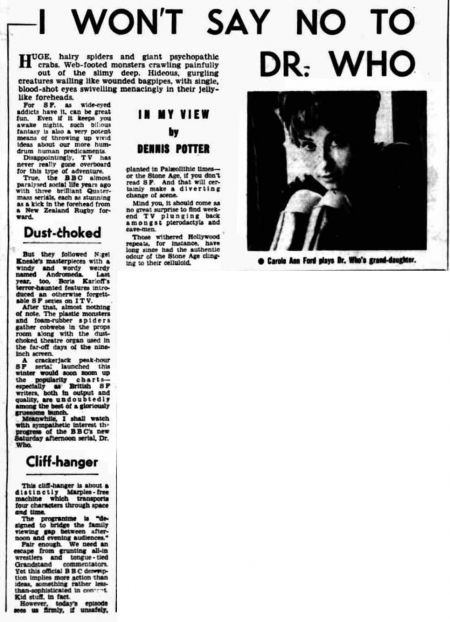 In My View by Dennis Potter

For SF, as wide-eyed addicts have it, can be great fun. Even it keeps you awake nights. such bilious fantasy is also a very potent means of throwing up vivid ideas about our more humdrum human predicaments.

Disappointingly, T V has never really gone overboard for this type of adventure.

True. the BBC almost paralysed social life years ago with three brilliant Quatermass serials, each as stunning as a kick In the forehead from a New Zealand Rugby forward.

After that, almost nothing of note. The plastic monsters and foam-rubber spiders gather cobwebs in the props room along with the dust-choked theatre organ used in the far-off days of the nine-inch screen.

A crackerjack peak-hour SF serial launched this winter would soon zoom up the popularity chart especially as British SF writers, both in output and quality, are undoubtedly among the best of a gloriously gruesome bunch.

Meanwhile. I shall watch with sympathetic interest the progress of the BBC's new Saturday afternoon serial. Dr. Who

This cliff-hanger is about a distinctly Marples-free machine which transports four characters through space and time. The programme is "designed to bridge the family viewing gap between afternoon and evening audiences."

Fair enough. We need an escape from grunting all-in wrestlers and tongue - tied Grandstand commentators. Yet this official B B C description implies more action than ideas, something rather less-than-sophisticated in context. Kid stuff, in fact.

However. today's episode sees us firmly, if unsafely, planted in Paleolithic times — or the Stone Age, if you don't read SF. And that will certainly make a diverting change of scene.

Mind you, It should come u no great surprise to find weekend TV plunging back amongst pterodactyls and cave-men.