I may not own a Tardis, but we all carry our own time machines in our heads 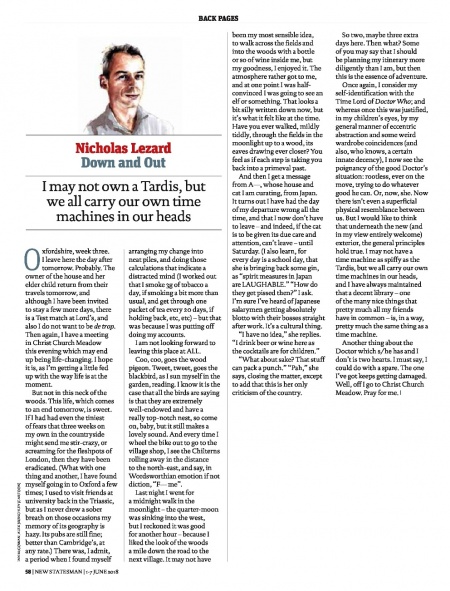 Oxfordshire, week three. I leave here the day after tomorrow. Probably. The owner of the house and her elder child return from their travels tomorrow, and although I have been invited to stay a few more days, there is a Test match at Lord's, and also I do not want to be de trop. Then again, I have a meeting in Christ Church Meadow this evening which may end up being life-changing. I hope it is, as I'm getting a little fed up with the way life is at the moment.

But not in this neck of the woods. This life, which comes to an end tomorrow, is sweet. If I had had even the tiniest of fears that three weeks on my own in the countryside might send me stir-crazy, or screaming for the fleshpots of London, then they have been eradicated. (What with one thing and another, I have found myself going in to Oxford a few times; I used to visit friends at university back in the Triassic, but as I never drew a sober breath on those occasions my memory of its geography is hazy. Its pubs are still fine; better than Cambridge's, at any rate.) There was, I admit, a period when I found myself arranging my change into neat piles, and doing those calculations that indicate a distracted mind (I worked out that I smoke n of tobacco a day, if smoking a bit more than usual, and get through one packet of tea every 20 days, if holding back, etc, etc) - but that was because I was putting off doing my accounts.

I am not looking forward to leaving this place at ALL.

Coo, coo, goes the wood pigeon. Tweet, tweet, goes the blackbird, as I sun myself in the garden, reading. I know it is the case that all the birds are saying is that they are extremely well-endowed and have a really top-notch nest, so come on, baby, but it still makes a lovely sound. And every time I wheel the bike out to go to the village shop, I see the Chilterns rolling away in the distance to the north-east, and say, in Wordsworthian emotion if not diction, "F—me".

Last night I went for a midnight walk in the moonlight - the quarter-moon was sinking into the west, but I reckoned it was good for another hour - because I liked the look of the woods a mile down the road to the next village. It may not have been my most sensible idea, to walk across the fields and into the woods with a bottle or so of wine inside me, but my goodness, I enjoyed it. The atmosphere rather got to me, and at one point I was half-convinced I was going to see an elf or something. That looks a bit silly written down now, but it's what it felt like at the time. Have you ever walked, mildly fiddly, through the fields in the moonlight up to a wood, its eaves drawing ever closer? You feel as if each step is taking you back into a primeval past.

And then I get a message from A—, whose house and cat I am curating, from Japan. It turns out I have had the day of my departure wrong all the time, and that I now don't have to leave - and indeed, if the cat is to be given its due care and attention, can't leave - until Saturday. (I also learn, for every day is a school day, that she is bringing back some gin, as "spirit measures in Japan are LAUGHABLE." "How do they get pissed then?" I ask. I'm sure I've heard of Japanese salarymen getting absolutely blotto with their bosses straight after work. It's a cultural thing.

"I have no idea," she replies. "I drink beer or wine here as the cocktails are for children."

"What about sake? That stuff can pack a punch." "Pah," she says, closing the matter, except to add that this is her only criticism of the country.

So two, maybe three extra days here. Then what? Some of you may say that I should be planning my itinerary more diligently than I am, but then this is the essence of adventure.

Once again, I consider my self-identification with the Time Lord of Doctor Who; and whereas once this was justified, in my children's eyes, by my general manner of eccentric abstraction and some weird wardrobe coincidences (and also, who knows, a certain innate decency), I now see the poignancy of the good Doctor's situation: rootless, ever on the move, trying to do whatever good he can. Or, now, she. Now there isn't even a superficial physical resemblance between us. But I would like to think that underneath the new (and in my view entirely welcome) exterior, the general principles hold true. I may not have a time machine as spiffy as the Tardis, but we all carry our own time machines in our heads, and I have always maintained that a decent library - one of the many nice things that pretty much all my friends have in common - is, in a way, pretty much the same thing as a time machine.

Another thing about the Doctor which s/he has and I don't is two hearts. I must say, I could do with a spare. The one I've got keeps getting damaged. Well, off I go to Christ Church Meadow. Pray for me.