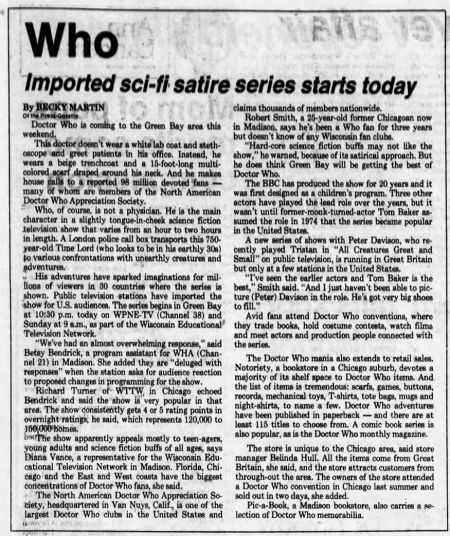 Doctor Who is coming to the Green Bay area this weekend.

This doctor doesn't wear a white lab coat and stethoscope and greet patients in his office. Instead, he wears a beige trenchcoat and a 15-foot-long multicolored scarf draped around his neck. And he makes house calls to a reported 98 million devoted fans — many of whom are members of the North American Doctor Who Appreciation Society.

Who, of course, is not a physician. He is the main character in a slightly tongue-in-cheek science fiction television show that varies from an hour to two hours in length. A London police call box transports this 750-year-old Time Lord (who looks to be in his earthly 30s) to various confrontations with unearthly creatures and adventures.

His adventures have sparked imaginations for millions of viewers in 30 countries where the series is shown. Public television stations have imported the show for U.S. audiences. The series begins in Green Bay at 10:30 p.m. today on WPNE-TV (Channel 38) and Sunday at 9 a.m., as part of the Wisconsin Educational Television Network.

"We've had an almost overwhelming response," said Betsy Bendrick, a program assistant for WHA (Channel 21) in Madison. She added they are "deluged with responses" when the station asks for audience reaction to proposed changes in programming for the allow.

Richard Turner of WTTW in Chicago echoed Bendrick and said the show is very popular in that area. The show consistently gets 4 or 5 rating points in overnight ratings, he said, which represents 120,000 to 150,000 homes.

"The show apparently appeals mostly to teen-agers, young adults and science fiction buffs of all ages, says Diana Vance, a representative for the Wisconsin Educational Television Network in Madison. Florida, Chicago and the East and West coasts have the biggest concentrations of Doctor Who fans, she said.

The North American Doctor Who Appreciation Society, headquartered in Van Nuys, Calif., is one of the largest Doctor Who clubs in the United States and claims thousands of members nationwide.

Robert Smith, a 25-year-old former Chicagoan now in Madison, says he's been a Who fan for three years but doesn't know of any Wisconsin fan clubs.

"Hard-core science fiction buffs may not like the show," he warned, because of its satirical approach. But he does think Green Bay will be getting the best of Doctor Who.

The BBC has produced the show for 20 years and it was first designed as a children's program. Three other actors have played the lead role over the years, but it wasn't until former-monk-turned-actor Tom Baker assumed the role in 1974 that the series became popular in the United States.

A new series of shows with Peter Davison, who recently played Tristan in "All Creatures Great and Small" on public television, is running in Great Britain but only at a few stations in the United States.

"I've seen the earlier actors and Tom Baker is the best," Smith said. "And 1 just haven't been able to picture (Peter) Davison in the role. He's got very big shoes to fill."

The Doctor Who mania also extends to retail sales. Notoriety, a bookstore in a Chicago suburb, devotes a majority of its shelf space to Doctor Who items. And the list of items is tremendous: scarfs, games, buttons, records, mechanical toys, T-shirts, tote bags, mugs and night-shirts, to name a few. Doctor Who adventures have been published in paperback — and there are at least 115 titles to choose from. A comic book series is also popular, as is the Doctor Who monthly magazine.

The store is unique to the Chicago area, said store manager Belinda Hull. All the items come from Great Britain, she said, and the store attracts customers from through-out the area. The owners of the store attended a Doctor Who convention in Chicago last summer and sold out in two days, she added.

Pic-a-Book, a Madison bookstore, also carries a selection of Doctor Who memorabilia.