Introducing the British 'Dr Who' 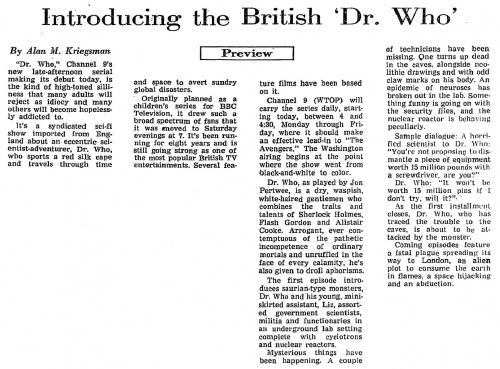 "Dr. Who," Channel 9's new late-afternoon serial making its debut today, is the kind of high-toned silliness that many adults will reject as idiocy and many others will become hopelessly addicted to.

It's a syndicated sci-fi show imported from England about an eccentric scientist-adventurer, Dr. Who, who sports a red silk cape and travels through time and space to avert sundry global disasters.

Originally planned as a children's series for BBC Television, it drew such a broad spectrum of fans that it was moved to Saturday evenings at 7. It's been running for eight years and is still going strong as one of the most popular British TV entertainments. Several feature films have been based on it.

Channel 9 (WTOP) will carry the series daily, starting today, between 4 and 4:30, Monday through Friday, where it should make an effective lead-in to "The Avengers." The Washington airing begins at the point where the show went from black and-white to color.

Dr. Who, as played by Jon Pertwee, is a dry, waspish, white-haired gentlemen who combines the traits and talents of Sherlock Holmes, Flash Gordon and Alistair Cooke. Arrogant, ever contemptuous of the pathetic incompetence of ordinary mortals and unruffled in the face of every calamity, he's also given to droll aphorisms.

Mysterious things have been happening, A couple of technicians have been missing. One turns up dead in the caves, alongside neolithic drawings and with odd claw marks on his body. An epidemic of neuroses has broken out in the lab. Something funny is going on with the security files, and the nuclear reactor is behaving peculiarly.

As the first installment closes, Dr. Who, who has traced the trouble to the caves, is about to be attacked by the monster.

Coming episodes feature a fatal plague spreading its way to London, an alien plot to consume the earth in flames, a space hijacking and an abduction.