Is public television too snobby? 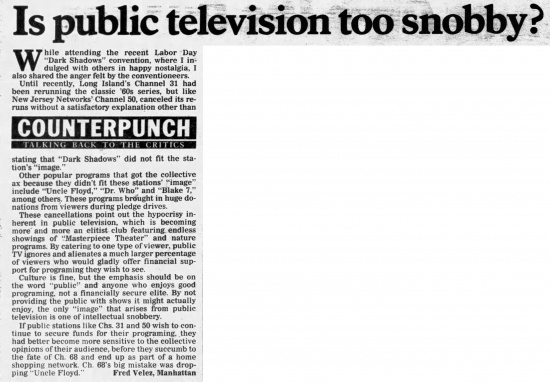 While attending the recent Labor Day "Dark Shadows" convention, where I indulged with others in happy nostalgia, I also shared the anger felt by the conventioneers.

Until recently, Long Island's Channel 31 had been rerunning the classic '60s series, but like New Jersey Networks' Channel 50, canceled its reruns without a satisfactory explanation other than stating that "Dark Shadows" did not fit the station's "image."

Other popular programs that got the collective ax because they didn't fit these stations' "image" include "Uncle Floyd," "Dr. Who" and "Blake 7," among others. These programs brought in huge donations from viewers during pledge drives.

These cancellations point out the hypocrisy inherent in public television, which is becoming more and more an elitist club featuring endless showings of "Masterpiece Theater" and nature programs. By catering to one type of viewer, public TV ignores and alienates a much larger percentage of viewers who would gladly offer financial support for programing they wish to see.

Culture is fine, but the emphasis should be on the word "public" and anyone who enjoys good programing. not a financially secure elite. By not providing the public with shows it might actually enjoy, the only "image" that arises from public television is one of intellectual snobbery.

If public stations like Chs. 31 and 50 wish to continue to secure funds for their programing. :they had better become more sensitive to the collective opinions of their audience, before they succumb to the fate of Ch. 68 and end up as part of a home shopping network. Ch. 68's big mistake was dropping "Uncle Floyd."