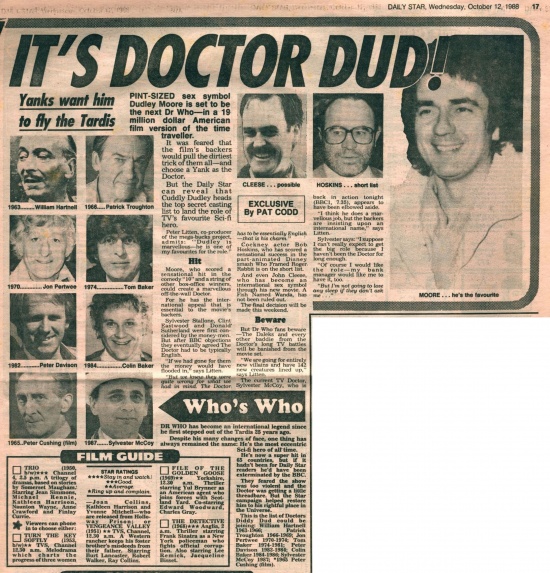 PINT-SIZED sex symbol Dudley Moore is set to be the next Dr Who—in a 19 million dollar American film version of the time traveller.

Yanks want him to fly the Tardis

It was feared that the film's backers would pull the dirtiest trick of them all—and choose a Yank as the Doctor.

But the Daily Star can reveal that Cuddly Dudley heads the top secret casting list to land the role of TV's favourite Sci-fi hero.

Peter Litten, co-producer of the mega-bucks project, admits: "Dudley is marvellous—he is one of my favourites for the role."

Moore, who scored a sensational hit in the comedy "10" and a string of other box-office winners, could create a marvellous off-the-wall Doctor.

For he has the international appeal that is essential to the movie's backers.

Sylvester Stallone, Clint Eastwood and Donald Sutherland were first considered by the money-men. But after BBC objections they eventually agreed The Doctor had to be typically English.

"If we had gone for them the money would have flooded in," says Litten.

"But we knew they were quite wrong for what we had in mind. The Doctor has to be essentially English —that is his charm."

Cockney actor Bob Hoskins, who has scored a sensational success in the part-animated Disney smash Who Framed Roger, Rabbit is on the short list.

And even John Cleese, who has become an international sex symbol through his new movie. A Fish Named Wanda, has not been ruled out.

The final decision will be made this weekend.

But Dr Who fans beware —The Daleks and every other baddie from the Doctor's long TV battles will be banished from the movie set.

"We are going for entirely new villains and have 142 new creatures lined up," says Litten.

The current TV Doctor, Sylvester McCoy, who is back in action tonight (BBC1, 7.35), appears to have been elbowed aside.

"I think he does a marvellous job, but the backers are insisting upon an international name," says Litten.

Sylvester says: "I suppose I can't really expect to get the big role because I haven't been the Doctor for long enough.

DR WHO has become an international legend since he first stepped out of the Tardis 25 years ago.

Despite his many changes of face, one thing has always remained the same: He's the most eccentric Sci-fi hero of all time.

He's now a super hit in 65 countries, but if it hadn't been for Daily Star readers he'd have been exterminated by the BBC.

They feared the show was too violent and the Doctor was getting a little threadbare. But the Star campaign helped restore him to his rightful place in the Universe.