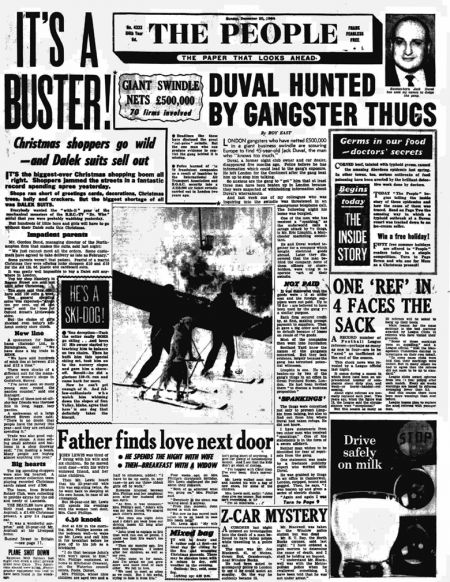 Shops ran short of greetings cards, decorations, Christmas trees, holly and crackers. But the biggest shortage of all was DALEK SUITS.

Everybody wanted the mechanical monsters of the serial that you were probably watching yesterday.

But hundreds of little boys without their Dalek suits this Christmas

"We just cannot meet all the orders. Some customers have agreed to take delivery at late as February.

Some parents weren't that patient. Fearful of a tearful Christmas they were offering lucky shoppers £10 and £15 for the £8 12s. 6d. plastic and cardboard suits.

It was pretty well impossible to buy a Dalek suit anywhere in London.

Top toy shop Hamley's in Regent Street are sold out until after Christmas.

The stores said they have sold 100 suits a week.

The general spending spree was expected—"about ten per cent, up on last year," said the boss of Oxford Street's Littlewoods store.

But the choice of gifts shocked even today's affluent society store chiefs.