It's time traveller Peri - that's Who 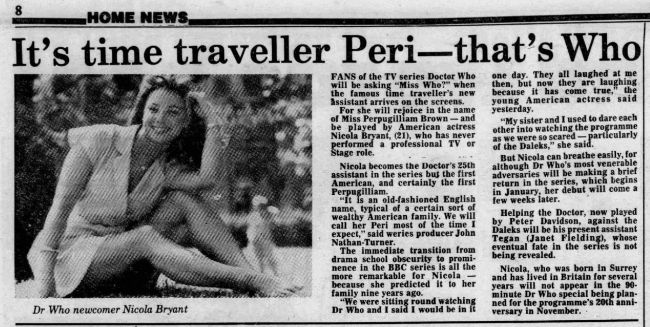 FANS of the TV series Doctor Who will be asking "Miss Who?" when the famous time traveller's new assistant arrives on the screens.

For she will rejoice in the name of Miss Perpugilliam Brown — and be played by American actress Nicola Bryant, (21), who has never performed a professional TV or Stage role.

Nicola becomes the Doctor's 25th assistant in the series but the first American, and certainly the first Perpugilliam.

"It is an old-fashioned English name, typical of a certain sort of wealthy American family. We will call her Peri most of the time I expect," said series producer John Nathan-Turner.

The immediate transition from drama school obscurity to prominence in the BBC series is all the more remarkable for Nicola — because she predicted it to her family nine years ago.

"We were sitting round watching Dr Who and I said I would be in it one day. They all laughed at me then, but now they are laughing because it has come true," the young American actress said yesterday.

"My sister and I used to dare each other into watching the programme as we were so scared — particularly of the Daleks," she said.

But Nicola can breathe easily, for although Dr Who's most venerable adversaries will be making a brief return in the series, which begins in January, her debut will come a few weeks later.

Helping the Doctor, now played by Peter Davidson, against the Daleks will be his present assistant Tegan (Janet Fielding), whose eventual fate in the series is not being revealed.

Nicola, who was born in Surrey and has lived in Britain for several years will not appear in the 90-minute Dr Who special being planned for the programme's 20th anniversary in November.