It helps to be a Time Lord 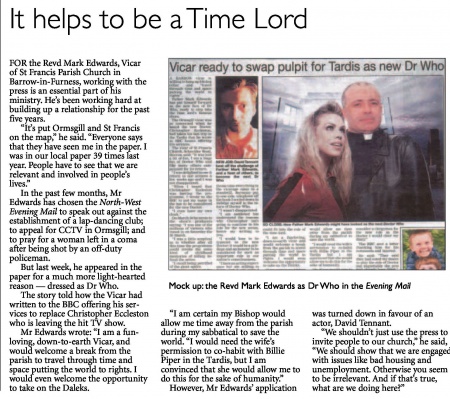 FOR the Revd Mark Edwards, Vicar of St Francis Parish Church in Barrow-in-Furness, working with the press is an essential part of his ministry. He's been working hard at building up a relationship for the past five years.

"It's put Ormsgill and St Francis on the map," he said. "Everyone says that they have seen me in the paper. I was in our local paper 39 times last year. People have to see that we are relevant and involved in people's lives."

In the past few months, Mr Edwards has chosen the North-West Evening Mail to speak out against the establishment of a lap-dancing club; to appeal for CCTV in Ormsgill; and to pray for a woman left in a coma after being shot by an off-duty policeman.

But last week, he appeared in the paper for a much more light-hearted reason — dressed as Dr Who.

The story told how the Vicar had written to the BBC offering his services to replace Christopher Eccleston who is leaving the hit TV show.

Mr Edwards wrote: "I am a fun-loving, down-to-earth Vicar, and would welcome a break from the parish to travel through time and space putting the world to rights. I would even welcome the opportunity to take on the Daleks.

"I am certain my Bishop would allow me time away from the parish during my sabbatical to save the world. "I would need the wife's permission to co-habit with Billie Piper in the Tardis, but I am convinced that she would allow me to do this for the sake of humanity."

However, Mr Edwards' application was turned down in favour of an actor, David Tennant.

"We shouldn't just use the press to invite people to our church," he said, "We should show that we are engaged with issues like bad housing and unemployment. Otherwise you seem to be irrelevant. And if that's true, what are we doing here?"

Caption: Mock up: the Revd Mark Edwards as Dr Who in the Evening Mail