Jack out of focus 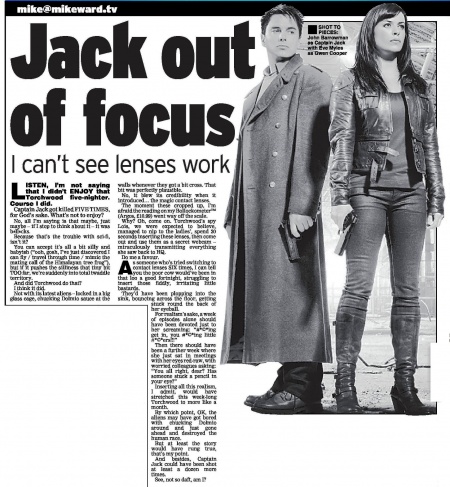 LISTEN, I'm not saying that I didn't ENJOY that Torchwood five-nighter. Course I did.

Captain Jack got killed FIVE TIMES, for God's sake. What's not to enjoy? No, all I'm saying is that maybe, just maybe — if I stop to think about it — it was b*ll*cks.

Because that's the trouble with sci-fi, isn't it?

You can accept it's all a bit silly and babyish ("ooh, gosh, I've just discovered I can fly / travel through time / mimic the mating call of the Himalayan tree frog"), but if it pushes the silliness that tiny bit TOO far, we're suddenly into total twaddle territory.

And did Torchwood do that?

I think it did.

Not with its latest aliens— locked in a big glass cage, chucking Dolmio sauce at the walls whenever they got a bit cross. That bit was perfectly plausible.

No, it blew its credibility when it introduced... the magic contact lenses. The moment these cropped up, I'm afraid the reading on my Bollockometer™ (Argos, £10.99) went way off the scale. Why? Oh, come on. Torchwood's spy Lois, we were expected to believe, managed to nip to the ladies', spend 20 seconds inserting these lenses, then come out and use them as a secret webcam —miraculously transmitting everything she saw back to HQ.

Do me a favour.

As someone who's tried switching to contact lenses SIX times, I can tell you the poor cow would've been in that loo a good fortnight, struggling to insert those fiddly, irritating little bastards.

They'd have been plopping into the sink, bouncing across the floor, getting stuck round the back of her eyeball.

Then there should have been a further week where she just sat in meetings with her eyes red-raw, with worried colleagues asking: "You all right, dear? Has someone stuck a pencil in your eye?"

Inserting all this realism, I admit, would have stretched this week-long Torchwood to more like a month.

By which point, OK, the aliens may have got bored with chucking Dolmio around and just gone ahead and destroyed the human race.

But at least the story would have rung true, that's my point.

And besides, Captain Jack could have been shot at least a dozen more times.