Jenna's a glamorous predator... but is she scarier than Daleks at No 10? 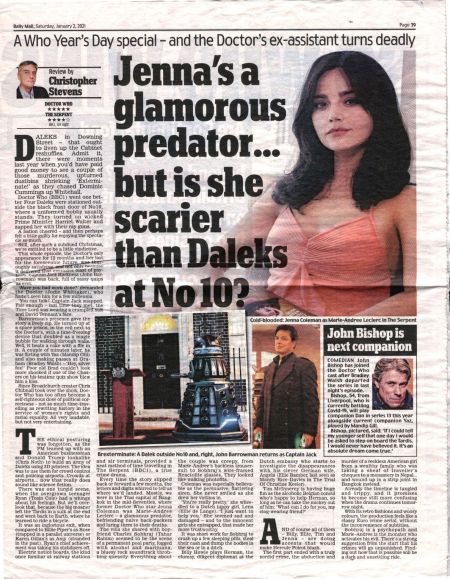 DALEKS in Downing Street - that ought to liven up the Cabinet reshuffles. Admit it, there were moments last year when you'd have paid good money to see a couple of those murderous, upturned dustbins shrieking 'Exterminate!' as they chased Dominic Cummings up Whitehall.

Doctor Who (BBC1) went one better. Four Daleks were stationed outside the black front door of No10, where a uniformed bobby usually stands. They turned on wicked Prime Minister Harriet Walter and zapped her with their ray guns.

A nation cheered - and then perhaps felt a little guilty for enjoying the spectacle so much.

Still, after such a subdued Christmas, we're entitled to be a little vindictive.

This whole episode, the Doctor's only appearance for 12 months and her last for the foreseeable future, was thoroughly satisfying, and not only because it delivered that excessive blast of payback. Captain Jack Harkness (John Barrowman) was back, full of sassy quips as ever.

'Have you had work done?' demanded the Doctor (Jodie Whittaker), who hadn't seen him for a few millennia.

Barrowman's presence gave the story a lively zip. He turned up at a space prison, in the cell next to the Doctor's, with a time-freezing device that doubled as a magic bubble for walking through walls. Well, it beats a cake with a file in it. A couple of minutes later, he was flirting with Yaz (Mandip Gill) and also making passes at Graham (Bradley Walsh) - 'Hey, silver fox!' Poor old Brad couldn't look more shocked if one of the Chasers on his teatime quiz show blew him a kiss.

Since Broadchurch creator Chris Chibnall took over the show, Doctor Who has too often become a self-righteous dose of political correctness - not so much time-travelling as rewriting history in the service of women's rights and racial equality. All very laudable, but not very entertaining.

THE ethical posturing was forgotten, as the PM teamed up with an American businessman and Donald Trump lookalike (Chris Noth) to build an army of Daleks using 3D printers. The idea was to use them for crowd control and policing airports. Crowds at airports... now that really does sound like science fiction.

There was one turgid scene, when the overgrown teenager Ryan (Tosin Cole) had a whinge about his feelings. But we'll overlook that, because the big moaner left the Tardis in a sulk at the end and went back to Earth, where he learned to ride a bicycle.

It was an inglorious exit, when compared to Billie Piper's as Rose (trapped in a parallel universe) or Karen Gillan's as Amy (stranded in the past). Ryan's chief achievement was taking his stabilisers off. Electric notice boards, the kind once familiar at railway stations and air terminals, provided a neat method of time travelling in The Serpent (BBC1), a true crime drama.

Every time the story slipped back or forward a few months, the letters and digits whirred to tell us where we'd landed. Mostly, we were in the Thai capital of Bangkok in the mid-Seventies, where former Doctor Who star Jenna Coleman was Marie-Andree Leclerc - a glamorous predator, befriending naive back-packers and luring them to their deaths. The villa she shared with boyfriend Charles Sobhraj (Tahar Rahim) seemed to be the scene of a permanent pool party, fogged with alcohol and marijuana, a bluesy rock soundtrack throbbing queasily. Everything about the couple was creepy, from Marie-Andree's backless trouser-suit to Sobhraj's wire-framed Reactolite glasses. They looked like walking photofits.

Coleman was especially believable as the persuasive, flattering siren. She never smiled as she drew her victims in.

'You're really pretty,' she wheedled to a Dutch hippy girl, Lena (Ellie de Lange). 'I just want to help you.' She seemed sad and damaged - and to the innocent girls she entrapped, that made her more trustworthy.

It was short work for Sobhraj to crush up a few sleeping pills, steal their cash and dump the bodies in the sea or in a ditch.

Billy Howle plays Herman, the clumsy, diligent diplomat at the Dutch embassy who starts to investigate the disappearances with his clever German wife, Angela (Ellie Bamber, last seen as Mandy Rice-Davies in The Trial Of Christine Keeler).

Tim McInnerny is having huge fun as the alcoholic Belgian consul who's happy to help Herman, so long as he can take the mickey out of him: 'What can I do for you, my clog-wearing friend?'

AND of course all of them - Billy, Ellie, Tim and Jenna - are doing accents that would make Hercule Poirot blush.

The first part ended with a truly sordid crime, the abduction and murder of a reckless American girl from a wealthy family who was taking a sheaf of traveller's cheques to a monastery in Nepal... and wound up in a strip joint in Bangkok instead.

Already the timeline is tangled and trippy, and it promises to become still more confusing when the drama continues tomorrow night.

With its retro fashions and woozy colours, the production feels like a classy Euro crime serial, without the inconvenience of subtitles. Sobhraj is a psychopath and Marie-Andree is the monster who activates his evil. There's a strong suggestion from the start that his crimes will go unpunished. Finding out how that is possible will be a dark and unsettling ride.

Caption: Cold-blooded: Jenna Coleman as Marle-Andree Leclerc In The Serpent

Caption: Brexterminate: A Dalek outside No10 and, right, John Barrowman returns as Captain Jack

John Bishop is next companion

COMEDIAN John Bishop has joined the Doctor Who cast after Bradley Walsh departed the series in last night's episode.

Bishop, 54, from Liverpool, who is currently battling Covid-19, will play companion Dan in series 13 this year alongside current companion Yaz, played by Mandip Gill.

Bishop, pictured, said: 'If I could tell my younger self that one day I would be asked to step on board the Tardis, I would never have believed it. It's an absolute dream come true.'