Jodie's off... so Who will replace her? 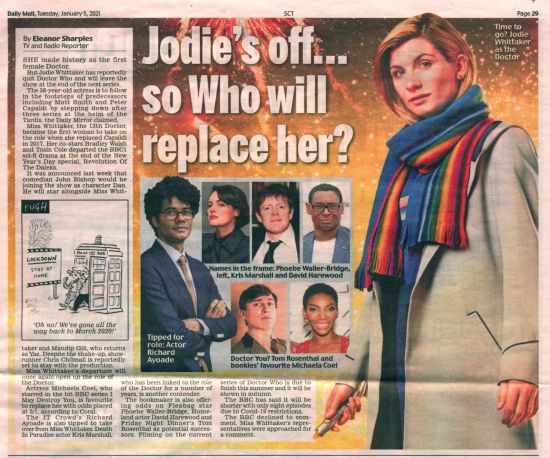 SHE made history as the first female Doctor.

But Jodie Whittaker has reportedly quit Doctor Who and will leave the show at the end of the next series.

The 38-year-old actress is to follow in the footsteps of predecessors including Matt Smith and Peter Capaldi by stepping down after three series at the helm of the Tardis, the Daily Mirror claimed.

Miss Whittaker, the 13th Doctor, became the first woman to take on the role when she replaced Capaldi in 2017. Her co-stars Bradley Walsh and Tosin Cole departed the BBC1 sci-fi drama at the end of the New Year's Day special, Revolution Of The Daleks.

It was announced last week that 1 comedian John Bishop would be joining the show as character Dan. He will star alongside Miss Whittaker and Mandip Gill, who returns as Yaz. Despite the shake-up, show-runner Chris Chibnall is reportedly set to stay with the production. Miss Whittaker's departure will once again open up the role of the Doctor.

Actress Michaela Coel, who starred in the hit BBC series I May Destroy You, is favourite to replace her with odds placed at 5/1, according to Coral.

The IT Crowd's Richard Ayoade is also tipped to take over from Miss Whittaker. Death In Paradise actor Kris Marshall, who has been linked to the role of the Doctor for a number of years, is another contender.

The bookmaker is also offering odds on Fleabag star Phoebe Waller-Bridge, Homeland actor David Harewood and Friday Night Dinner's Tom Rosenthal as potential successors. Filming on the current series of Doctor Who is due to finish this summer and it will be shown in autumn.

The BBC has said it will be shorter with only eight episodes due to Covid-19 restrictions. The BBC declined to comment. Miss Whittaker's representatives were approached for a comment.