Jodie Quittaker ... Doctor Who star says it is time to leave the Tardis 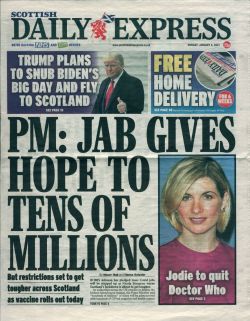 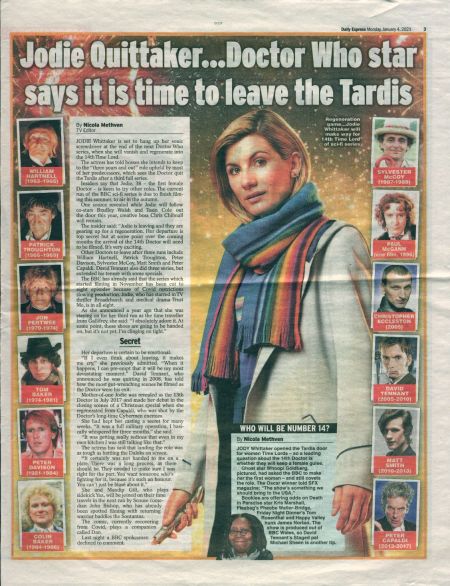 JODIE Whittaker is set to hang up her sonic screwdriver at the end of the next Doctor Who series, when she will vanish and regenerate into the 14th Time Lord.

The actress has told bosses she intends to keep to the "three years and out" rule upheld by most of her predecessors, which sees the Doctor quit the Tardis after a third full series.

Insiders say that Jodie, 38 — the first female Doctor — is keen to try other roles. The current run of the BBC sci-fi series is due to finish filming this summer, to air in the autumn.

One source revealed while Jodie will follow co-stars Bradley Walsh and Tosin Cole out the door this year, creative boss Chris Chibnall will remain.

The insider said: "Jodie is leaving and they are gearing up for a regeneration. Her departure is top secret but at some point over the coming months the arrival of the 14th Doctor will need to be filmed. It's very exciting.

The BBC has already said that the series which started filming in November has been cut to eight episodes because of Covid restrictions slowing production. Jodie, who has starred in TV thriller Broadchurch and medical drama Trust Me, is in all eight.

As she announced a year ago that she was staying on for her third run as the time traveller from Gallifrey, she said: "I absolutely adore it. At some point, these shoes are going to be handed on, but it's not yet. I'm clinging on tight."

Her departure is certain to be emotional.

"If I even think about leaving, it makes me cry," she previously admitted. "When it happens, I can pre-empt that it will be my most devastating moment." David Tennant, who announced he was quitting in 2008, has told how the most gut-wrenching scenes he filmed as the Doctor were his exit.

Mother-of-one Jodie was revealed as the 13th Doctor in July 2017 and made her debut in the closing scenes of a Christmas special when she regenerated from Capaldi, who was shot by the Doctor's long-time Cybermen enemies.

She had kept her casting a secret for many weeks. "It was a full military operation, I basically whispered for three months," she said.

"It was getting really tedious that even in my own kitchen I was still talking like that."

The actress has said that landing the role was as tough as battling the Daleks on screen.

"It certainly was not handed to me on a plate. There was a long process, as there should be. They needed to make sure I was right for the part. You want someone who's fighting for it, because it's such an honour. You can't just be blasé about it."

She and Mandip Gill, who plays sidekick Yaz, will be joined on their time travels in the next run by Scouse comedian John Bishop, who has already been spotted filming with returning warrior baddies the Sontarans.

JODY Whittaker opened the Tardis door for women Time Lords — so a leading question about the 14th Doctor is whether they will keep a female guise. Ghost star Whoopi Goldberg, pictured, had asked the BBC to make her the first woman — and still covets the role. The Oscar winner told SFX magazine: "The show's something we should bring to the USA."