Jodie Set for Role as the 13th Doctor 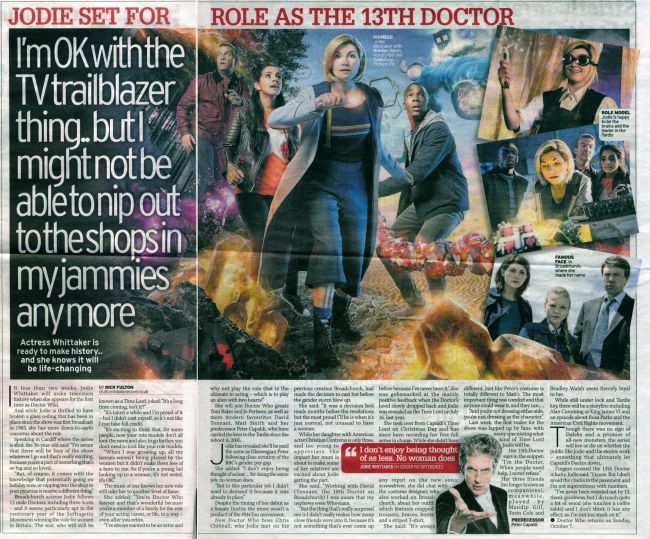 Actress Whittaker is ready to make history.. and she knows it will be life-changing

IN less than two weeks, Jodie Whittaker will make television history when she appears for the first time as Doctor Who.

And while Jodie is thrilled to have broken a glass ceiling that has been in place since the show was first broadcast in 1963, she has more down-to-earth concerns about the role.

Speaking in Cardiff where the series is shot, the 36-year-old said: "I'm aware that there will be fans of the show wherever I go and that's really exciting, because you're a part of something that's so big and so loved.

"But, of course, it comes with the knowledge that potentially going on holiday now, or nipping into the shop in your pyjamas is maybe a different thing:

Broadchurch actress Jodie follows 12 male Doctors, including three Scots - and it seems particularly apt in the centenary year of the Suffragette Movement winning the vote for women in Britain. The star, who will still be known as a Time Lord, joked: "It's a long time coming. isn't it?"

It's taken a while and I'm proud of it - but I didn't cast myself, so it's not like I can take full credit.

"When I was growing up, all my heroes weren't being played by the women but it didn't make them less of a hero to me. So if you're a young lad looking up to a woman, it's not weird, its OK"

The mum of one knows her new role will take her to another level of fame.

She added: "You're Doctor Who forever and that's wonderful because you're a member of a family for the rest of your acting career, or life, in a way - even after you retire.

"I've always wanted to be an actor and why not play the role that is the ultimate in acting - which is to play an alien with two hearts.

She will join Doctor Who greats Tom Baker and Jo Pertwee, as well as more modern favourites David Tennant, Matt Smith and her predecessor Peter Capaldi, who have carried the keys to the Tardis since the reboot in 2005.

Jodie has revealed shell be paid the same as Glaswegian Peter following close scrutiny of the BBC's gender pay gap. She added: "I don't enjoy being thought of as less ... for doing the same job, no woman does.

"But in this particular job I didn't need to demand it because it was already in place."

Despite the timing of her debut as a female Doctor, the move wasn't a product of the #MeToo movement.

New Doctor Who boss Chris Chibnall, who Jodie met on his previous creation Broadchurch, had made the decision to cast her before the gender storm blew up.

She said: It was a decision he'd made months before the revelations but the most proud IT be is when it's just normal, not unusual to have a woman.

While her daughter with American actor Christian Contreras is only three, and too young to appreciate the impact her mum is about to make. some of her relatives are excited about Jodie getting the part.

She said: "Working with David (Tennant, the 10th Doctor on Broadchurch) I was aware that my nephews were Whovians.

"But the thing that's really surprised me is I didn't really realise how many close friends were into it, because it's not something that's ever come up before because I've never been it: She was gobsmacked at the mainly positive feedback when the Doctor's hood slowly dropped back and Jodie was revealed as the Time Lord on July 16, last year.

She took over from Capaldi's Time Lord on Christmas Day and has since been recording her first full series in char: e. While she didn't have any input on the new sonic screwdriver, she did chat with the costume designer, who also worked on Broadchurch, about her outfit which features cropped trousers, braces, boots and a striped T-shirt.

She said: "It's always different. Just like Peter's costume is totally different to Matt's. The most important thing was comfort and that anyone could wear it, and they can.... And you're not dressing either side, you're just dressing as the character: Last week. the first trailer for the show was lapped up by fans, with _ many speculating what kind of Time Lord Jodie will be.

Her 13th Doctor says in the snippet "I'm the Doctor. When people need help, I never refuse:" Her three friends (no longer known as companions), meanwhile, played by Mandip Gill, Tosin Cole and Bradley Walsh seem fiercely loyal to her.

Though there was no sign of Daleks and a promise of all-new monsters, the series will live or die on whether the public like Jodie and the stories work - something that ultimately let Capaldi's Doctor down.

Fingers crossed the 13th Doctor is lucky, Jodie said: "1 know. But I don't avoid the cracks in the pavement and I'm not superstitious with numbers.

"I've never been weirded out by 13, thank goodness, but I do touch quite a lot of wood (she touches a coffee table) and I don't think it has any effect, so I'm not too stuck on it.

Doctor Who returns on Sunday, October 7.

FAMOUS FACE In Broadchurch, where she made her name