Jon Pertwee, warts and all 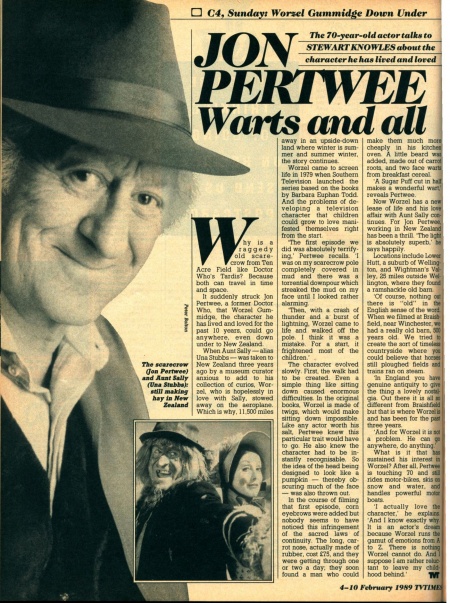 Why is a raggedy old scarecrow from Ten Acre Field like Doctor Who's Tardis? Because both can travel in time and space.

It suddenly struck Jon Pertwee, a former Doctor Who, that Worzel Gummidge, the character he has lived and loved for the past 10 years, could go anywhere, even down under to New Zealand.

When Aunt Sally — alias Una Stubbs — was taken to New Zealand three years ago by a museum curator anxious to add to his collection of curios, Worzel, who is hopelessly in love with Sally, stowed away on the aeroplane. Which is why, 11,500 miles away in an upside-down land where winter is summer and summer winter, the story continues.

Worzel came to screen life in 1979 when Southern Television launched the series based on the books by Barbara Euphan Todd. And the problems of developing a television character that children could grow to love manifested themselves right from the start.

'The first episode we did was absolutely terrifying,' Pertwee recalls. 'I was on my scarecrow pole completely covered in mud and there was a torrential downpour which streaked the mud on my face until I looked rather alarming.

'Then, with a crash of thunder and a burst of lightning, Worzel came to life and walked off the pole. I think it was a mistake. For a start, it frightened most of the children.'

The character evolved slowly. First, the walk had to be created. Even a simple thing like sitting down caused enormous difficulties. In the original books, Worzel is made of twigs, which would make sitting down impossible. Like any actor worth his salt, Pertwee knew this particular trait would have to go. He also knew the character had to be instantly recognisable. So the idea of the head being designed to look like a pumpkin — thereby obscuring much of the face — was also thrown out.

In the course of filming that first episode, corn eyebrows were added but nobody seems to have noticed this infringement of the sacred laws of continuity. The long, carrot nose, actually made of rubber, cost £75, and they were getting through one or two a day; they soon found a man who could make them much more cheaply in his kitchen oven. A little beard was added, made out of carrot roots, and two face warts from breakfast cereal.

'A Sugar Puff cut in half makes a wonderful wart,' reveals Pertwee.

Now Worzel has a new lease of life and his love affair with Aunt Sally continues. For Jon Pertwee, working in New Zealand has been a thrill. 'The light is absolutely superb,' he says happily.

Locations include Lower Hutt, a suburb of Wellington, and Wightman's Valley, 25 miles outside Wellington, where they found a ramshackle old barn.

'Of course, nothing out there is "old" in the English sense of the word. When we filmed at Braish-field, near Winchester, we had a really old barn, 500 years old. We tried to create the sort of timeless countryside where you could believe that horses still ploughed fields and trains ran on steam.

'In England you have genuine antiquity to give the thing a lovely nostalgia. Out there it is all so different from Braishfield but that is where Worzel is and has been for the past three years.

'And for Worzel it is not a problem. He can go anywhere, do anything.'

What is it that sustained his interest Worzel? After all, Pertwee is touching 70 and rides motor-bikes, skis snow and water, an handles powerful motor boats.

'I actually love the character,' he explains 'And I know exactly why. It is an actor's dream because Worzel runs the gamut of emotions from A to Z. There is nothing Worzel cannot do. And I suppose I am rather reluctant to leave my childhood behind.'