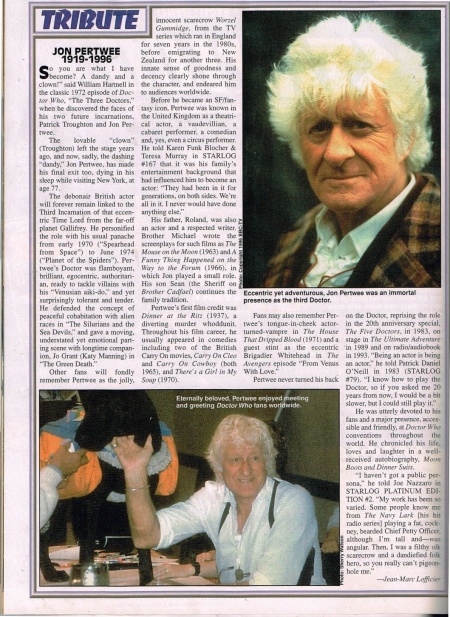 So you are what I have become? A dandy and a clown!" said William Hartnell in the classic 1972 episode of Doctor Who, "The Three Doctors," when he discovered the faces of his two future incarnations, Patrick Troughton and Jon Pertwee.

The lovable "clown" (Troughton) left the stage years ago, and now, sadly, the dashing "dandy," Jon Pertwee, has made his final exit too, dying in his sleep while visiting New York, at age 77.

The debonair British actor will forever remain linked to the Third Incarnation of that eccentric Time Lord from the far-off planet Gallifrey. He personified the role with his usual panache from early 1970 ("Spearhead from Space") to June 1974 ("Planet of the Spiders"). Pertwee's Doctor was flamboyant, brilliant, egocentric, authoritarian, ready to tackle villains with his "Venusian aikido," and yet surprisingly tolerant and tender. He defended the concept of peaceful cohabitation with alien races in "The Silurians and the Sea Devils," and gave a moving, understated yet emotional parting scene with longtime companion, Jo Grant (Katy Manning) in "The Green Death."

Other fans will fondly remember Pertwee as the jolly, innocent scarecrow Worzel Gummidge, from the TV series which ran in England for seven years in the 1980s, before emigrating to New Zealand for another three. His innate sense of goodness and decency clearly shone through the character, and endeared him to audiences worldwide.

Before he became an SF/fantasy icon, Pertwee was known in the United Kingdom as a theatrical actor, a vaudevillian, a cabaret performer, a comedian and, yes, even a circus performer. He told Karen Funk Blocher & Teresa Murray in STARLOG #167 that it was his family's entertainment background that had influenced him to become an actor: "They had been in it for generations, on both sides. We're all in it. I never would have done anything else."

His father, Roland, was also an actor and a respected writer. Brother Michael wrote the screenplays for such films as The Mouse on the Moon (1963) and A Funny Thing Happened on the 7-Way to the Forum (1966), in which Jon played a small role. His son Sean (the Sheriff on Brother Cadfael) continues the family tradition.

Pertwee's first film credit was Dinner at the Ritz (1937), a diverting murder whoddunit. Throughout his film career, he usually appeared in comedies including two of the British Carry On movies, Carry On Cleo and Carry On Cowboy (both 1965), and There's a Girl in My Soup (1970).

Fans may also remember Pertwee's tongue-in-cheek actor-turned-vampre in The House That Dripped Blood (1971) and a guest stint as the eccentric Brigadier Whitehead in The Avengers episode "From Venus With Love."

Pertwee never turned his back on the Doctor, reprising the role in the 20th anniversary special, The Five Doctors, in. 1983, on stage in The Ultimate Adventure in 1989 and on radio/audiobook in 1993. "Being an actor is being an actor," he told Patrick Daniel O'Neill in 1983 (STARLOG #79). "I know how to play the Doctor, so if you asked me 20 years from now, I would be a bit slower, but I could still play it."

He was utterly devoted to his fans and a major presence, accessible and friendly, at Doctor Who conventions throughout the world. He chronicled his life, loves and laughter in a well-received autobiography, Moon Boots and Dinner Suits.

"I haven't got a public persona," he told Joe Nazzaro in STARLOG PLATINUM EDITION #2. "My work has been so varied. Some people know me from The Navy Lark [his hit radio series] playing a fat, cockney, bearded Chief Petty Officer, although I'm tall and angular. Then, I was a filthy olk scarecrow and a dandiefied folk hero, so you really can't pigeon-hole me."

Caption: Eccentric yet adventurous, Jon Pertwee was an immortal presence as the third Doctor.