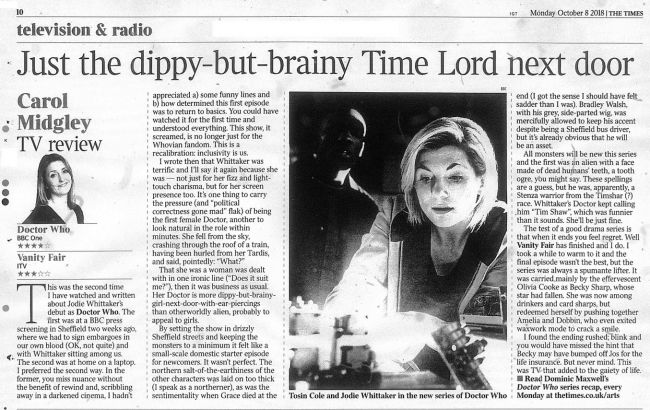 This was the second time I have watched and written about Jodie Whittaker's debut as Doctor Who. The first was at a BBC press screening in Sheffield two weeks ago, where we had to sign embargoes in our own blood (OK, not quite) and with Whittaker sitting among us. The second was at home on a laptop. I preferred the second way. In the former, you miss nuance without the benefit of rewind and, scribbling away in a darkened cinema, I hadn't appreciated a) some funny lines and b) how determined this first episode was to return to basics. You could have watched it for the first time and understood everything. This show, it screamed, is no longer just for the Whovian fandom. This is a recalibration: inclusivity is us.

I wrote then that Whittaker was terrific and I'll say it again because she was — not just for her fizz and light-touch charisma, but for her screen presence too. It's one thing to carry the pressure (and "political correctness gone mad" flak) of being the first female Doctor, another to look natural in the role within minutes. She fell from the sky, crashing through the roof of a train, having been hurled from her Tardis, and said, pointedly: "What?"

That she was a woman was dealt with in one ironic line ("Does it suit me?"), then it was business as usual. Her Doctor is more dippy-but-brainy-girl-next-door-with-ear-piercings than otherworldly alien, probably to appeal to girls.

By setting the show in drizzly Sheffield streets and keeping the monsters to a minimum it felt like a small-scale domestic starter episode for newcomers. It wasn't perfect. The northern salt-of-the-earthiness of the other characters was laid on too thick (I speak as a northerner), as was the sentimentality when Grace died at the end (I got the sense I should have felt sadder than I was). Bradley Walsh, with his grey, side-parted wig, was mercifully allowed to keep his accent despite being a Sheffield bus driver, but it's already obvious that he will be an asset.

All monsters be new this series and the first was an alien with a face made of dead humans' teeth, a tooth ogre, you might say. These spellings are a guess, but he was, apparently, a Stenza warrior from the Timshar (?) race. Whittaker's Doctor kept calling him "Tim Shaw", which was funnier than it sounds. She'll be just fine.

Doctor Who series recap, every Monday at thetimes.co.uk/arts

Caption: Tosin Cole and Jodie Whittaker in the new series of Doctor Who