Just what the 'Doctor Who' ordered 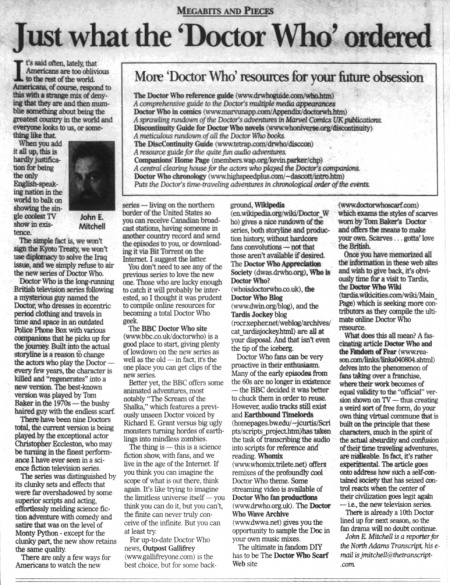 It's said often, lately, that Americans are too oblivious to the rest of the world. Americans, of course, respond to this with a strange mix of denying that they are and then mumblie smelling about being the greatest country in the world and everyone looks to us, or something like that

When you add it all up, this is hardly justification for being the only English-speaking nation in the world to balk on showing the single coolest TV show in existence.

The simple fact is, we won't sign the Kyoto Treaty, we won't use diplomacy' to solve the Iraq issue, and we simply refuse to air the new series of Doctor Who.

Doctor Who is the long-running British television series following a mysterious guy named the Doctor, who dresses in eccentric period clothing and travels in time and space in an outdated Police Phone Box with various companions that he picks up for the journey. Built into the actual storyline is a reason to change the actors who play the Doctor — every few years, the character is killed and "regenerates" into a new version. The best-known version was played by Tom Baker in the 1970s — the bushy haired guy with the endless scarf.

There have been nine Doctors total, the current version is being played by the exceptional actor Christopher Eccleston, who may be turning in the finest performance I have ever seen in a science fiction television series.

The series was distinguished by its clunky sets and effects that were far overshadowed by some superior scripts and acting, effortlessly melding science fiction adventure with comedy and satire that was on the level of Monty Python - except for the clunky part, the new show retains the same quality.

There are only a few ways for Americans to watch the new series — living on the northern border of the United States so you can receive Canadian broadcast stations, having someone in another country record and send the episodes to you, or downloading it via Bit Torrent on the Internet I suggest the latter.

You don't need to see any of the previous series to love the new one. Those who are lucky enough to catch it will probably be interested, so I thought it was prudent to compile online resources for becoming a total Doctor Who geek.

The BBC Doctor Who site (www.bbc.co.uk/doctorwho) is a good place to start, giving plenty of lowdown on the new series as well as the old — in fact, its the one place you can get clips of the new series.

Better yet, the BBC offers some animated adventures, most notably "The Scream of the Shalka," which features a previously unseen Doctor voiced by Richard E. Grant versus big ugly monsters turning hordes of earthlings into mindless zombies.

The thing is — this is a science fiction show, with fans, and we live in the age of the Internet. If you think you can imagine the scope of what is out there, think again. It's like trying to imagine the limitless universe itself — you think you can do it, but you can't, the finite can never truly conceive of the infinite. But you can at least try.

For up-to-date Doctor Who news, Outpost Gallifrey (www.gallifreyone.com) is the best choice, but for some hackground, Wikipedia (en.wikipedia.org/wiki/DoctorWho) gives a nice rundown of the series, both storyline and production history, without hardcore fans convolutions — not that those aren't available if desired. The Doctor Who Appreciation Society (dwas.drwho.org), Wbo is Doctor Who? (whoisdoctorwho.co.uk), the Doctor Who Blog (www.dwin.org/blog), and the Tardis Jockey blog (rocr.xepher.net/weblog/archives/cat_tardisjockey.html) are all at your disposal. And that isn't even the tip of the iceberg.

Doctor Who fans can be very proactive in their enthusiasm. Many of the early episodes from the 60s are no longer in existence — the BBC decided it was better to chuck them in order to reuse. However, audio tracks still exist and Earthbound Timelords (homepages.bw.edu/—jcurtis/scripts/scripts_project.htm)has taken the task of transcribing the audio into scripts for reference and reading. Whomix (www.whomix.trilete.net) offers remixes of the profoundly cool Doctor Who theme. Some streaming video is available of Doctor Who fan productions (wwwd.rwho.org.uk). The Doctor Who Wave Archive (www.dwwa.net) gives you the opportunity to sample the Doc in your own music mixes.

The ultimate in fandom DIY has to be The Doctor Who Scarf Web site (www.doctorwhoscarf.corn) which exams the styles of scarves worn by Tom Baker's Doctor and offers the means to make your own. Scarves ... gotta' love the British.

Once you have memorized all the information in these web sites and wish to give back, it's obviously time for a visit to Tardis, the Doctor Who Wild (tardis.wikicities.corn/wild/Main_Page) which is seeking more contributors as they compile the ultimate online Doctor Who resource.

What does this all mean? A fascinating article Doctor Who and the Fandom of Fear (wmv.reason.com/links/1inks040804.shtml) delves into the phenomenon of fans taking over a franchise, where their work becomes of equal validity to the "official" version shown on TV — thus creating a weird sort of free form, do your own thing virtual commune that is built on the principle that these characters, much in the spirit of the actual absurdity and confusion of their time traveling adventures, are malleable. In fact, it's rather experimental. The article goes onto address how such a self-contained society that has seized control reacts when the center of their civilization goes legit again — i.e., the new television series.

There is already a 10th Doctor lined up for next season, so the fan drama will no doubt continue.

John E. Mitchell is a reporter for the North Adams Transcript, his email is jmitchell@thetranscript.com

More 'Doctor Who' resources for your future obsession

The Doctor Who reference guide (www.drwhoguide.com/wholitm)

A comprehensive guide to the Doctor's multiple media appearances

Doctor Who in comics (www.marnmapp.com/Appendix/doctorwh.htm)

A meticulous rundown or the Doctor Who books.

A resource guide for the quite fun audio adventures.

A central clearing house for the actors who played the Doctors companions.

Puts the Doctors nine-traveling adventures in chronological order of the events.