Just what the Doctor ordered (The Irish Times) 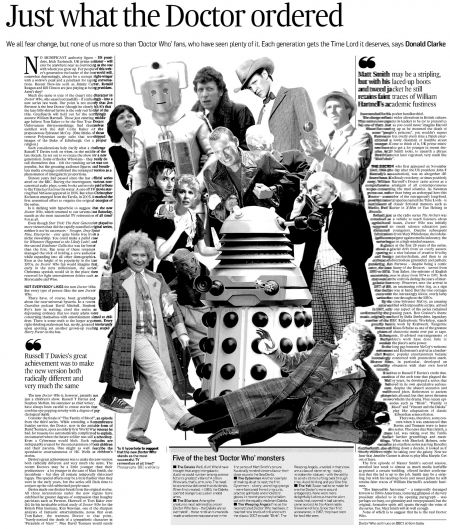 We all fear change, but none of us more so than 'Doctor Who' fans, who have seen plenty of it. Each generation gets the Time Lord it deserves, says Donald Clarke

NO SIGNIFICANT authority figure - US president, Irish Taoiseach, UK prime minister - Will ever be anywhere near as convincing as the one with whom you grew up. For people of this writer's generation the leader of the free world will, somewhat depressingly, always be a corrupt right-winger with a widow's peak and a penchant for taping conversations. Recent blow-ins such as Jimmy Carter, Ronald Reagan and Bill Clinton are just playing at being president. Aren't they?

Much the same is true of the (near) title character in Doctor Who, who eased successfully if confusingly-into a new series last week. Our point is not merely that Jon Pertwee is the best Doctor (though he clearly is); it's that the late frilly-shirted luvvie is the only real holder of the title. Greybeards will hold out for the terrifyingly austere William Hartnell. Those just entering middle age believe Tom Baker to be the One True Doctor, Unfortunate thirtysomethings find themselves saddled with the dull Colin Baker or the preposterous Sylvester McCoy. (One thinks of those remote Polynesian cargo cults that worshipped images of the Duke of Edinburgh. Get a proper religion.)

Such considerations help clarify what a challenge Russell T Davies took on when, in the middle of the last decade, he set out to re-create the show for a new generation. Some orthodox Whovians - they really do call themselves that - felt the resulting series was too populist, but the groaning audience figures and breathless media coverage confirmed the revamped version as a phenomenon of intergalactic proportions.

Sixteen years had passed since the last official series aired on the BBC. During the interregnum, various non-canonical audio plays, comic books and novels paid tribute to the Time Lord across the water. A one-off TV movie starring Paul McGann appeared in 1996. But when Christopher Eccleston emerged from the Tardis, in 2005, it marked the first committed effort to reignite the original energies of the series.

Is it dallying with hyperbole to suggest that the new Doctor Who, which returned to our screens last Saturday, stands as the most successful TV reinvention of all time? Not at all.

Even though Star Trek: The Next Generation played to more viewers than did the rapidly cancelled original series, neither it nor its successors - Voyager, Deep Space Nine, Enterprise - ever quite broke free from a niche viewership. You could make a pallid case for Whatever Happened to the Likely Lads?, and the second Battlestar Gallactica was far better than the first. But none of these revamps managed the trick of holding a core audience while expanding into all other demographics. Even at the height of its popularity in the late 1970s, no Doctor Who fan would imagine that, early in the next millennium, the series' Christmas specials would sit in the place then reserved for light entertainment deities such as Morecambe and Wise.

There have, of course, been grumblings about the near-universal hysteria. In a recent Guardian podcast David Mitchell, Stephen Fry's heir in waiting, cited the series as depressing evidence that too many adults were concerning themselves with entertainment aimed at children. There is some truth to the larger argument. Every right-thinking malcontent has, surely, groaned intolerantly upon spotting yet another grown-up reading stupid Harry Potter on the bus.

The new Doctor Who is, however, patently not just a children's show. Russell T Davies and Stephen Moffatt, his successor as chief writer, have always been careful to create stories that combine eye-popping novelty with a degree of psychological depth.

Consider the finale of "The Family of Blood", an episode from the third series. While attending a Remembrance Sunday service, the Doctor, now in the amiable form of David Tennant, spots an elderly first World War veteran he had, for reasons too astronomically complicated to explain, encountered when the future soldier was still a schoolboy. Even a Cyberman would blub. Such episodes are indisputably created for the entertainment of both children and their parents. One might as well describe the speculative entertainments of HG Wells as children's stories.

Davies's great achievement was to make the new version both radically different and very much the same. The recent Doctors may be a little younger than their predecessors - a lot younger in the case of Matt Smith, the incumbent - but they all remain temporally dislocated fogeys. The special effects may be a little flashier than they were in the early years, but the series still finds time to conjure up the odd rubberised people-eater.

Davies made one distinct break from the original stories. All three incarnations under the new regime have exhibited far greater degrees of compassion than haughty patricians such as Pertwee, Hartwell or Tom Baker ever did. In his invaluable critical study of Doctor Who for the British Film Institute, Kim Newman, one of the sharpest analysts of fantastic entertainments, notes that even Tom Baker, the warmest Doctor to that point, "barely noticed the death of a sympathetic character in 'Pyramids of Mars'". Nice David Tennant would surely have reached for his pocket handkerchief.

The change reflects wider alterations in British culture. That nation now expects its leaders to be (or to pretend to be) one of them. Just as you could never imagine Harold Macmillan tearing up as he mourned the death of some "people's princess", you wouldn't expect Pertwee to fret overly every time a Dalek exterminated a lowly dustman or humble street sweeper. Come to think of it, UK prime ministers have also got a lot younger in recent decades. At 28 Smith looks, to unearth a phrase David Cameron later regretted, very much like "Blair's heir"

THE DOCTOR who first appeared on November 23rd, 1963 (the day after the US president John F Kennedy assassination), was an altogether different beast. Endlessly crotchety, at times positively nasty, William Hartnell's Doctor came across as a comprehensive amalgam of all contemporaneous tropes concerning the mad scientist. As Newman points out, rather than being an archetypal hero this Doctor - a member of the outrageously long-lived, possibly immortal species named the Time Lords - is reminiscent of classic fictional mentors such as Merlin, Prof Xavier in X-Men or Van Helsing in Dracula.

Indeed, just as the radio series The Archers was conceived as a vehicle to teach listeners about agricultural issues, Doctor Who was initially supposed to sneak science education past distracted youngsters. Despite subsequent fulminations from Mary Whitehouse, the indefatigable campaigner against media indecency, the series began in a high-minded manner.

A glance at the first 25 years of the series, shows a glacial drift from an overly austere opening to a nice balance of creative frivolity and benign patriarchalism, and then to an embrace of directionless gimmickry and pathetic pandering. Jon Pertwee - despite being a comic actor, the least funny of the Doctors - served from 1970 to 1974. Tom Baker, the epitome of English eccentricity, was in place from 1974 to 1981. Both men were at the controls during the years of intergalactic harmony. Observers note the arrival in 1977 of K9, an unamusing robot dog, as a sign that decline was at hand. But the true outrages came with the increasingly idiotic, overly larky series that ran throughout the 1980s.

By the time Sylvester McCoy, an amusing actor saddled with impossible scripts, arrived in 1987, only one aspect of the series remained undimmed by the passing years. Ron Grainer's theme, originally realised by Delia Derbyshire, legendary member of the BBC Radiophonic Workshop, stands proudly beside work by Kraftwerk, Tangerine Dream and Klaus Schulze as one of the greatest of electronic music ever put to tape. Subsequent, ill-advised rearrangements of Derbyshire's work have done little to weaken the pieces eerie power.

In the long gap between McCoy's welcome retirement and Ecclestone's arrival as a leather-clad Doctor, popular entertainment became increasingly concerned with postmodern snark. Horror films, in particular, developed an unhealthy obsession with their own horrid alma/ As.

It is thus to Russell T Davies's credit that, cautious of the arch tone that plagued the McCoy years, he developed a series that believed in its own speculative seriousness, despite the absurd scenarios and well-honed jokes. References to ancient plot points abound, but they never threaten to overwhelm the drama. Fine recent episodes such as "Blink", "Family of Blood" and "Vincent and the Daleks" play like adaptations of classic Edwardian science fiction.

There was, therefore, some concern when it was announced that Davies and Tennant were to leave the series. The news that Matt Smith, a mere lad, was taking over the Tardis fuelled further grumblings and mumblings. What with Sherlock Holmes, reinvented in an excellent series starring Benedict Cumberbatch, also shifting down a decade, it looked as if bloody children might be taking over the galaxy. Now we hear that Jennifer Gamer is about to play Miss Marple. Get out of here.

The first episode of Master Smith's second session, unveiled last week to almost as much media kerfuffle as greeted a certain wedding, offered further confirmation that the lad is up to the job. Smith may be a stripling, but with his laced-up boots and tweed jacket he still retains faint traces of William Hartnell's academic fustiness.

"The Impossible Astronaut" - a temporally deranged kowtow to 1960s Americana, featuring glimpses of the very president alluded to in the opening paragraph - was perhaps too busy, too gimmicky and overpopulated, but the original, formative spirit still spurts through the veins of the series. Yes, Matt Smith will do well enough.

None of which is to suggest that he is the real Doctor Who.

Doctor Who continues on BBC1 at 6pm today

Caption: 'Is it hyperbole to suggest that the new Doctor Whey stands as the most successful TV reinvention of all. time?'

Five of the best 'Doctor Who' monsters

Well, d'uh! Who'd have thought that angry intergalactic Dustbins could number among science fictions greatest villains? A billion Whovians, that's, erm, who. The need to economise delivered true dividends. When first created, in 1963, the Daleks sported plungers as sucker-ended arms

Among the creatures most admired by proper Doctor Who fans - the Daleks are so overrated! - these reptilian humanoids made a welcome reappearance in the first series of Matt Smith's tenure. Nautically minded viewers favour their close cousins the Sea Devils.

Another example of making-do at its best, the first Cybermen - silvery, unsmiling cyborgs - were fashioned from diving suits, practice golf balls and cricketers' gloves. In recent years they've fallen out with the equally intolerant Daleks.

Fine as the reconstituted Doctor Who had been, it reached new levels of brilliance with the classic 2007 episode "Blink". The Weeping Angels, unveiled in that show, are a class of stone being - easily mistake for statues - with the ability to send victims hurtling back through time. Avoid blinking and you'll be fine.

Space had to be made for one of the Doctor's more absurd antagonists. None were more delightfully ludicrous than the alien robots that, covered in bad carpets, came across like the Abominable Snowmen of lore. Since their first appearance, in 1967, they have been far too little seen.