Just what the Doctor ordered (The Times) 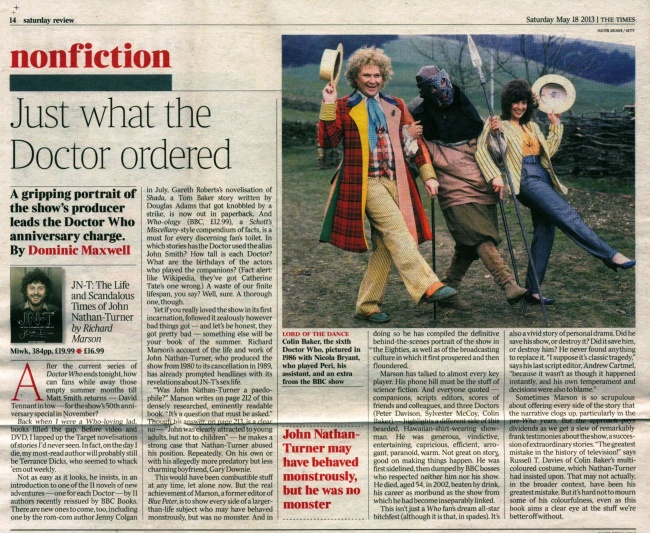 A gripping portrait of the show's producer leads the Doctor Who anniversary charge. By Dominic Maxwell

JN-T: The Life and Scandalous Times of John Nathan-Turner by Richard Marson

After the current series of Doctor Who ends tonight, how can fans while away those empty summer months till Matt Smith returns — David Tennant in tow — for the show's 50th anniversary special in November?

Back when I were a Who-lovin lad, books filled the gap. DVD, I lapped up the Target novelisations of stories I'd never seen. In fact, on the day I die, my most-read author will probably still be Terrance Dicks, who seemed to whack 'em out weekly.

Not as easy as it looks, he insists, in an introduction to one of the 11 novels of new adventures — one for each Doctor — by 11 authors recently reissued by BBC Books: There are new ones to come, too, including one by the rom-com author Jenny Colgan in July. Gareth Roberts's novelisation of [[Shada: The Lost Adventure by Douglas Adams|Shada]], a Tom Baker story written by Douglas Adams that got knobbled by a strike, is now out in paperback. And Who-ology (BBC, £12.99), a Schott's Miscellany-style compendium of facts, is a must for every discerning fan's toilet. In which stories has the Doctor used the alias John Smith? How tall is each Doctor? What are the birthdays of the actors who played the companions? (Fact alert like Wikipedia, they've got Catherine Tate's one wrong.) A waste of our finite lifespan, you say? Well, sure. A thorough one, though.

Yet if you really loved the show in its first incarnation, followed it zealously however bad things got — and let's be honest, they got pretty bad — something else will be your book of the summer. Richard Marson's account of the life and work of John Nathan-Turner, who produced the show from 1980 to its cancellation in 1989, has already prompted headlines with its revelations about JN-T's sex life.

"Was John Nathan-Turner a paedophile?" Marson writes on page 212 of this densely researched, eminently readable book. "It's a question that must be asked." Though his answer, on page 213, is a clear no -- "John was clearly attracted to young adults, but not to children" — he makes a strong case that Nathan-Turner abused his position. Repeatedly. On his own or with his allegedly more predatory but less charming boyfriend, Gary Downie.

This would have been combustible stuff at any time, let alone now. But the real achievement of Marson, a former editor of Blue Peter, is to show every side of a larger-than-life subject who may have behaved monstrously, but was no monster. And in doing so he has compiled the definitive behind-the-scenes portrait of the show in the Eighties, as well as of the broadcasting culture in which it first prospered and then floundered.

Marson has talked to almost every key player. His phone bill must be the stuff of science fiction. And everyone quoted — companions, scripts editors, scores of friends and colleagues, and three Doctors (Peter Davison, Sylvester McCoy, Colin Baker) -- highlights a different side of this bearded, Hawaiian-shirt-wearing showman. He was generous, vindictive, entertaining, capricious, efficient, arrogant, paranoid, warm. Not great on story, good on making things happen. He was first sidelined, then dumped by BBC bosses who respected neither him nor his show. He died, aged 54, in 2002, beaten by drink, his career as moribund as the show from which he had become inseparably linked.

This isn't just a Who fan's dream all-star bitchfest (although it is that, in spades). It's also a vivid story of personal drama. Did he save his show, or destroy it? Did it save him, or destroy him? He never found anything to replace it. "I suppose it's classic tragedy," says his last script editor, Andrew Cartmel, "because it wasn't as though it happened instantly, and his own temperament and decisions were also to blame."

Sometimes Marson is so scrupulous about offering every side of the story that the narrative clogs up, particularly in the pre-Who years. But the approach pays dividends as we get a slew of remarkably frank testimonies about the show, a succession of extraordinary stories. "The greatest mistake in the history of television!" says Russell T. Davies of Colin Baker's multi-coloured costume, which Nathan-Turner had insisted upon. That may not actually, in the broader context, have been his greatest mistake. But it's hard not to mourn some of his colourfulness, even as this book aims a clear eye at the stuff we're better off without.

Caption: LORD OF THE DANCE Colin Baker, the sixth Doctor Who, pictured in 1986 with Nicola Bryant, who played Peri, his assistant, and an extra from the BBC show