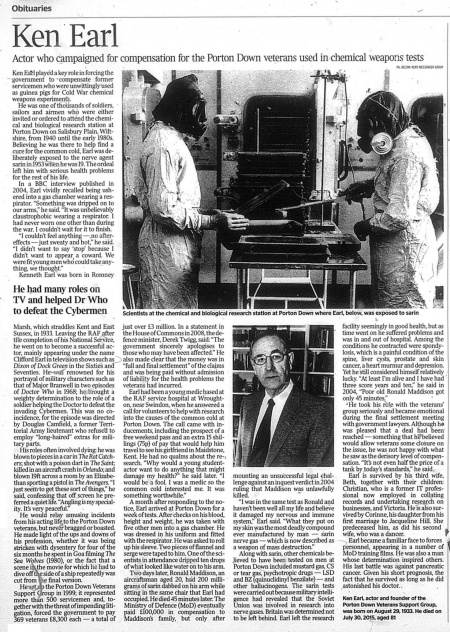 He was one of thousands of soldiers, sailors and airmen who were either invited or ordered to attend the chemical and biological research station at Porton Down on Salisbury Plain, Wiltshire, from 1940 until the early 1980s. Believing he was there to help find a cure for the common cold, Earl was deliberately exposed to the nerve agent sarin in 1953 when he was 19. The ordeal left him with serious health problems for the rest of his life.

In a BBC interview published in 2004, Earl vividly recalled being ushered into a gas chamber wearing a respirator. "Something was dripped on to our arms," he said. "It was unbelievably claustrophobic wearing a respirator. I had never worn one other than during the war. I couldn't wait for it to finish.

"I couldn't feel anything - no aftereffects - just sweaty and hot," he said. "I didn't want to say 'stop' because I didn't want to appear a coward. We were fit young men who could take anything, we thought."

Kenneth Earl was born in Romney Marsh, which straddles Kent and East Sussex, in 1933. Leaving the RAF after the completion of his National Service, he went on to become a successful actor, mainly appearing under the name Clifford Earl in television shows such as Dixon of Dock Green in the Sixties and Seventies. He was renowned for his portrayal of military characters such as that of Major Branwell in two episodes of Doctor Who in 1968; he brought a weighty determination to the role of a soldier helping the Doctor to defeat the invading Cybermen. This was no coincidence, for the episode was directed by Douglas Camfield, a former Territorial Army lieutenant who refused to employ "long-haired" extras for military parts. His roles often involved dying: he was blown to pieces in a car in The Rat Catchers; shot with a poison dart in The Saint; killed in an aircraft crash in Orlando; and blown 19ft across a room by an Elizabethan sporting a pistol in The Avengers. "I just seem to get these sort of things," he said, confessing that off screen he preferred a quiet life. "Angling is my speciality. It's very peaceful."

He would relay amusing incidents from his acting life to the Porton Down veterans, but never bragged or boasted. He made light of the ups and downs of his profession, whether it was being stricken with dysentery for four of the six months he spent in Goa filming The Sea Wolves (1980), or the fact that a scene in the movie for which he had to dive off the side of a ship repeatedly was cut from the final version.

He set up the Porton Down Veterans Support Group in 1999; it represented more than 500 servicemen and, together with the threat of impending litigation, forced the government to pay 369 veterans £8,300 each - a total of just over £3 million. In a statement in the House of Commons in 2008, the defence minister, Derek Twigg, said: "The government sincerely apologises to those who may have been affected." He also made clear that the money was in "full and final settlement" of the claims and was being paid without admission of liability for the health problems the veterans had incurred.

Earl had been a young medic based at the RAF service hospital at Wroughton, near Swindon, when he answered a call for volunteers to help with research into the causes of the common cold at Porton Down. The call came with induce-ments, including the prospect of a free weekend pass and an extra 15 shillings (75p) of pay that would help him travel to see his girlfriend in Maidstone, Kent. He had no qualms about the research. "Why would a young studentactor want to do anything that might damage my health?" he said later. "I would be a fool. I was a medic so the common cold interested me. It was something worthwhile."

A month after responding to the notice, Earl arrived at Porton Down for a week of tests. After checks on his blood, height and weight, he was taken with five other men into a gas chamber. He was dressed in his uniform and fitted with the respirator. He was asked to roll up his sleeve. Two pieces of flannel and serge were taped to him. One of the scien-tists in attendance dripped ten drops of what looked like water on to his arm.

Two days later, Ronald Maddison, an aircraftsman aged 20, had 200 milligrams of sarin dabbed on his arm while sit-ting in the same chair that Earl had occupied. He died 45 minutes later. The Ministry of Defence (MoD) eventually paid £100,000 in compensation to Maddison's family, but only after mounting an unsuccessful legal challenge against an inquest verdict in 2004 ruling that Maddison was unlawfully killed.

"I was in the same test as Ronald and haven't been well all my life and believe it damaged my nervous and immune system," Earl said. "What they put on my skin was the most deadly compound ever manufactured by man - sarin nerve gas - which is now described as a weapon of mass destruction."

Along with sarin, other chemicals believed to have been tested on men at Porton Down included mustard gas, CS or tear gas, psychotropic drugs - LSD and BZ (quinuclidinyl benzilate) - and other hallucinogens. The sarin tests were car-ried out because military intelligence had revealed that the Soviet Union was involved in research into nerve gases. Britain was determined not to be left behind. Earl left the research facility seemingly in good health, but as time went on he suffered problems and was in and out of hospital. Among the conditions he contracted were spondylosis, which is a painful condition of the spine, liver cysts, prostate and skin cancer, a heart murmur and depression. Yet he still con-sidered himself relatively lucky. "At least I'm alive and I have had three score years and ten," he said in 2004, "Poor old Ronald Maddison got only 45 minutes."

He took his role with the veterans' group seriously and became emotional during the final settlement meeting with gov-ernment lawyers. Although he was pleased that a deal had been reached - something that he believed would allow vet-erans some closure on the issue, he was not happy with what he saw as the derisory level of compensation. "It's not even half the price of a tank by today's standards," he said.

Earl is survived by his third wife, Beth, together with their children: Christian, who is a former IT professional now em-ployed in collating records and undertaking research on businesses, and Victoria. He is also survived by Corinne, his daughter from his first marriage to Jacqueline Hill. She predeceased him, as did his second wife, who was a dancer.

Earl became a familiar face to forces personnel, appearing in a number of MoD training films. He was also a man whose determination inspired others. His last battle was against pancreatic cancer. Given his short prognosis, the fact that he survived as long as he did astonished his doctor.