Lalla teaches Dr Who what's what 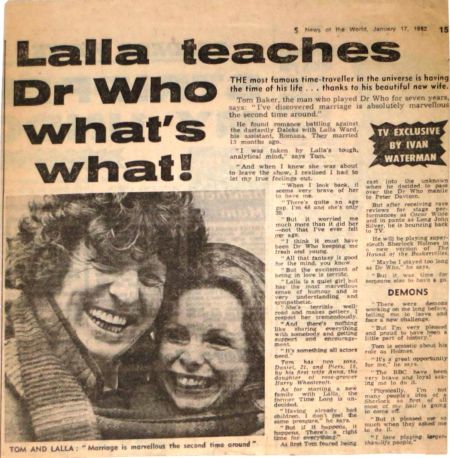 The most famous time traveller in the universe is having the time of his life thanks to his beautiful wife.

Tom Baker, the man who played Dr Who for seven years, says: "I discovered marriage is absolutely marvelous the second time around."

He found romance battling against the dastardly Daleks with Lalla Ward, his assistant, Romana. They married 13 months ago.

"I was taken by Lalla's tough, analytical mind," says Tom.

"And when I knew she was about to leave the show, I realized I had to let my true feelings out.

"When I look back, it seems very brave of her to have me.

"But it worried me much more than it did her -- not that I ever felt my age.

"I think it must have been Dr Who keeping the fresh and young.

"All that fantasy is good for the mind, you know.

"But the excitement of being in love is terrific.

"Lalla is a quiet girl but has the most marvelous sense of humor and is very understanding and sympathetic.

"She's terribly well-read and makes pottery. I respect her tremendously.

"And there's nothing like sharing everything with somebody and getting support and encouragement.

"It's something all actors need."

Tom has two sons, Daniel, 21, and Piers, 18, by his first wife Anna, the daughter of rose grower Harry Wheatcroft.

As for starting a new family was Lalla, the former Time Lord is undecided.

"Having already had children, I don't feel the same pressure," he says.

"But if it happens, it happens. There's a right time for everything."

At first Tom feared being cast into the unknown when he decided to pass over the Dr Who mantle to Peter Davison.

But after receiving rave reviews for stage performances as a Oscar Wilde and in panto as Long John Silver, he is bouncing back to TV.

He'll be playing super sleuth Sherlock Holmes in a new version of The Hound of the Baskervilles.

"Maybe I stayed too long as Dr Who," he says.

"But it was time for someone else to have a go."

"There were demons working on the long before, telling me to leave and face a new challenge.

"But I'm very pleased and proud to have been a little part of history."

Tom is ecstatic about his role as Holmes.

"It's a great opportunity for me," he says.

"The BBC have been very brave and while asking me to do it.

"Physically, I'm not many people's idea of a Sherlock so first of all most of my hair is going to come off.

"But it pleased me so much on as me do it.