Laying the track for a new sound 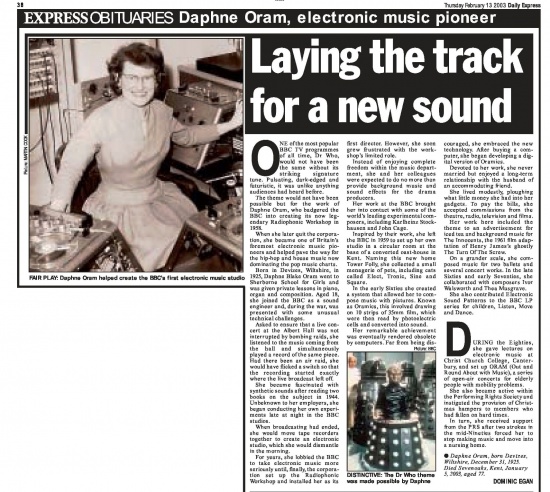 ONE of the most popular BBC TV programmes of all time, Dr Who, would not have been the same without its striking signature tune. Pulsating, dark-edged and futuristic, it was unlike anything audiences had heard before.

The theme would not have been possible but for the work of Daphne Oram, who badgered the BBC into creating its now legendary Radiophonic Workshop in 1958.

When she later quit the corporation, she became one of Britain's foremost electronic music pioneers and helped pave the way for the hip-hop and house music now dominating the pop music charts.

Born in Devizes, Wiltshire, in 1925, Daphne Blake Oram went to Sherborne School for Girls and was given private lessons in piano, organ and composition. Aged 18, she joined the BBC as a sound engineer and, during the war, was presented with some unusual technical challenges.

Asked to ensure that a live concert at the Albert Hall was not interrupted by bombing raids, she listened to the music coming from the hall and simultaneously played a record of the same piece. Had there been an air raid, she would have flicked a switch so that the recording started exactly where the live broadcast left off.

She became fascinated with synthetic sounds after reading two books on the subject in 1944. Unbeknown to her employers, she began conducting her own experiments late at night in the BBC studios.

When broadcasting had ended, she would move tape recorders together to create an electronic studio, which she would dismantle in the morning.

For years, she lobbied the BBC to take electronic music more seriously until, finally, the corporation set up the Radiophonic Workshop and installed her as its first director. However, she soon grew frustrated with the workshop's limited role.

Instead of enjoying complete freedom within the music department, she and her colleagues were expected to do no more than provide background music and sound effects for the drama producers.

Her work at the BBC brought her into contact with some of the world's leading experimental composers, including Karlheinz Stockhausen and John Cage.

Inspired by their work, she left the BBC in 1959 to set up her own studio in a circular room at the base of a converted cast-house in Kent. Naming this new home Tower Folly, she collected a small menagerie of pets, including cats called Elect, Tronic, Sine and Square.

In the early Sixties she created a system that allowed her to compose music with pictures. Known as Oramics, this involved drawing on 10 strips of 35mm film, which were then read by photoelectric cells and converted into sound.

Her remarkable achievement was eventually rendered obsolete by computers. Far from being discouraged, she embraced the new technology. After buying a computer, she began developing a digital version of Oramics.

Devoted to her work, she never married but enjoyed a long-term relationship with the husband of an accommodating friend.

She lived modestly, ploughing what little money she had into her gadgets. To pay the bills, she accepted commissions from the theatre, radio, television and films.

Her work here included the theme to an advertisement for iced tea and background music for The Innocents, the 1961 film adaptation of Henry James's ghostly The Turn Of The Screw.

On a grander scale, she composed music for two ballets and several concert works. In the late Sixties and early Seventies, she collaborated with composers Ivor Walsworth and Thea Musgrave.

DURING the Eighties, she gave lectures on electronic music at Christ Church College, Canterbury, and set up ORAM (Out and Round About with Music), a series of open-air concerts for elderly people with mobility problems.

She also became active within the Performing Rights Society and instigated the provision of Christmas hampers to members who had fallen on hard times.

In turn, she received support from the PRS after two strokes in the mid-Nineties forced her to stop making music and move into a nursing home.

Caption: DISTINCTIVE: The Dr Who theme was made possible by Daphne