Learning how to be a sophisticated spook 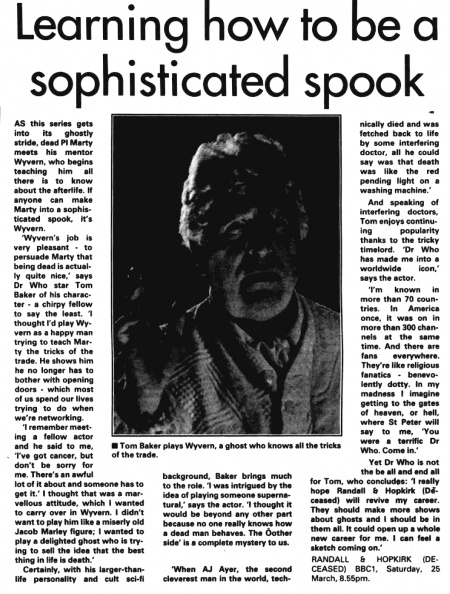 AS this series gets into its ghostly stride, dead PI Marty meets his mentor Wyvern, who begins teaching him all there is to know about the afterlife. If anyone can make Marty into a sophisticated spook, it's Wyvern.

'Wyvern's job is very pleasant - to persuade Marty that being dead is actually quite nice,' says Dr Who star Tom Baker of his character - a chirpy fellow to say the least. 'I thought I'd play Wyvern as a happy man trying to teach Marty the tricks of the trade. He shows him he no longer has to bother with opening doors • which most of us spend ow lives trying to do when we're networking. 'I remember meeting a fellow actor and he said to me, 'I've got cancer, but don't be sorry for me. There's an awful lot of it about and someone has to get it.' I thought that was a marvellous attitude, which I wanted to carry over in Wyvern. I didn't want to play him like a miserly old Jacob Marley figure; I wanted to play a delighted ghost who is trying to sell the idea that the best thing in life is death.'

Certainly, with his larger-than-life personality and cult sci-fi background, Baker brings much to the role. 'I was intrigued by the idea of playing someone supernatural,' says the actor. 'I thought it would be beyond any other part because no one really knows how a dead man behaves. The Pother side' is s complete mystery to us.

'When AJ Ayer, the second cleverest men in the world, technically died and was fetched back to life by some interfering doctor, all he could say was that death was like the red pending light on a washing machine.'

And speaking of interfering doctors, Tom enjoys continuing popularity thanks to the tricky timelord. 'Dr Who has made me into a worldwide icon,' says the actor.

'I'm known in more than 70 countries. In America once, it was on In more than 300 channels at the same time. And there are fens everywhere. They're like religious fanatics - benevolently dotty. In my madness I imagine getting to the gates of heaven, or hell, where St Peter will say to me, 'You were a terrific Dr Who. Come In.'

Yet Dr Who is not the be all and end all for Tom, who concludes: 'I really hope Randall & Hopkirk ceased) will revive my career. They should make more shows about ghosts and I should be in them ell. It could open up a whole new career for me. I can feel a sketch coming on.'

Caption: Tom Baker plays Wyvern, a ghost who knows all the tricks of the trade.