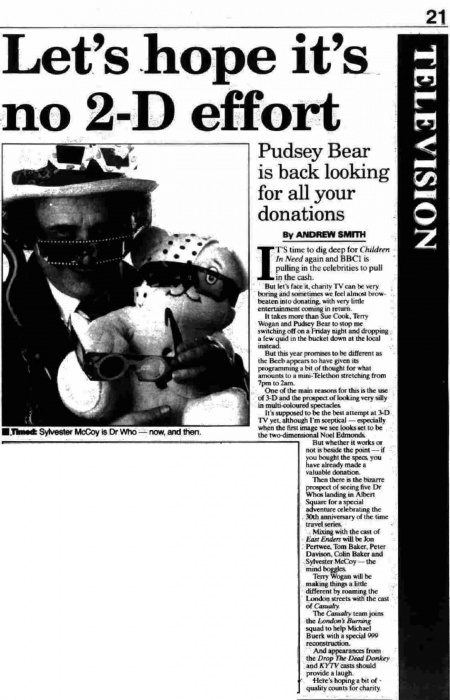 Pudsey Bear is back looking for all your donations

IT'S time to dig deep for Children In Need again and BBC! is pulling in the celebrities to pull in the cash.

But let's face it, chariy TV can be very boring and sometimes we feel almost brow-beaten into donating, with very little entertainment coming in retum.

It takes more than Sue Cook, Terry Wogan and Pudrey Bear to stop me switching off on a Friday night and dropping a few quid in the bucket down at the local instead.

But this year promises to he different as the Beeb appears to have given its programoung a bit of thought for what amounts to a mini-Telethon stretching from 7pm to 2am.

One of the main reasons for this a the use or 3-D and the prospect of looking very silly in multi-coloured spectacles.

It's supposed to be the best attempt at 3-D TV yet, although I'm sceptical — especially when the first image we see looks set to be the two-dimensional Noel Edmonds.

But whether it works on or not a beside the point — if you bought the specs you have already made valuable donation.

Then there a the bizarre prospect of seeing five Dr Whos landing in Albert Square for a special adventure celebrating the 30th anniversary of the time travel series.

Mixing with the cast of EastEnders will be lot Fertwee. Tom Baker. Peter Davison. Colin Baker and Sylvester McCoy — the mind boggles.

Terry Wogan will be making things a little different by roaming the London streets with the cast of Casualty.

The Casualty team joins the London's Burning squad to help Michael Buerk with a special 999 reconstruction.

And appearances few the Drop The Dead Donkey and KYTV casts should provide a laugh.

Here's hoping a bit of quality counts for charity.

Caption: Timed: Sylvester McCoy is Dr Who - now, and then