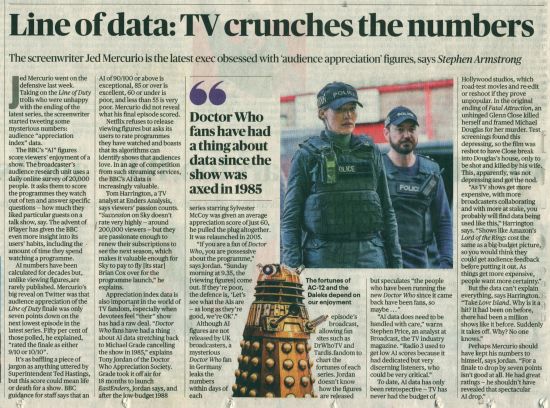 Jed Mercurio went on the defensive last week. Taking on the Line of Duty trolls who were unhappy with the ending of the latest series, the screenwriter started tweeting some mysterious numbers: audience "appreciation index" data.

The BBC's "AI" figures score viewers' enjoyment of a show. The broadcaster's audience research unit uses a daily online survey of 20,000 people. It asks them to score the programmes they watch out of ten and answer specific questions — how much they liked particular guests on a talk show, say. The advent of iPlayer has given the BBC even more insight into its users' habits, including the amount of time they spend watching a programme.

AI numbers have been calculated for decades but, unlike viewing figures are rarely published. Mercurio's big reveal on Twitter was that audience appreciation of the Line of Duty finale was only seven points down on the next lowest episode in the latest series. Fifty per cent of those polled, he explained, "rated the finale as either 9/10 or 10/10".

It's as baffling a piece of jargon as anything uttered by Superintendent Ted Hastings, but this score could mean life or death for a show. BBC guidance for staff says that an AI of 90/100 or above is exceptional, 85 or over is excellent, 60 or under is poor, and less than 55 is very poor. Mercurio did not reveal what his final episode scored.

Netflix refuses to release viewing figures but asks its users to rate programmes they have watched and boasts that its algorithms can identify shows that audiences love. In an age of competition from such streaming services, the BBC's AI data is increasingly valuable.

Tom Harrington, a TV analyst at Enders Analysis, says viewers' passion counts. "Succession on Sky doesn't rate very highly — around 200,000 viewers — but they are passionate enough to renew their subscriptions to see the next season, which makes it valuable enough for Sky to pay to fly [its star] Brian Cox over for the programme launch," he explains.

Appreciation index data is also important in the world of TV fandom, especially when devotees feel "their" show has had a raw deal. "Doctor Who fans have had a thing about AI data stretching back to Michael Grade cancelling the show in 1985," explains Tony Jordan of the Doctor Who Appreciation Society. Grade took it off air for 18 months to launch EastEnders, Jordan says, and after the low-budget 1988 series starring Sylvester McCoy was given an average appreciation score of just 60, he pulled the plug altogether. It was relaunched in 2005.

"If you are a fan of Doctor Who, you are possessive about the programme," says Jordan. "Sunday morning at 9.35, the [viewing figures] come out. If they're poor, the defence is, 'Let's see what the AIs are — as long as they're good, we're OK'."

Although AI figures are not released by UK broadcasters, a mysterious Doctor Who fan in Germany leaks the numbers within days of each episode's broadcast, allowing fan sites such as DrWhoTV and Tardis.fandom to chart the fortunes of each series. Jordan doesn't know how the figures are released but speculates "the people who have been running the new Doctor Who since it came back have been fans, so maybe ... "

"AI data does need to be handled with care," warns Stephen Price, an analyst at Broadcast, the TV industry magazine. "Radio 3 used to get low AI scores because it had dedicated but very discerning listeners, who could be very critical."

To date, AI data has only been retrospective — TV has never had the budget of Hollywood studios, which road-test movies and re-edit or reshoot if they prove unpopular. In the original ending of Fatal Attraction, an unhinged Glenn Close killed herself and framed Michael Douglas for her murder. Test screenings found this depressing, so the film was reshot to have Close break into Douglas's house, only to be shot and killed by his wife. This, apparently, was not depressing and got the nod.

"As TV shows get more expensive, with more broadcasters collaborating and with more at stake, you probably will find data being used like this," Harrington says. "Shows like Amazon's Lord of the Rings cost the same as a big-budget picture, so you would think they could get audience feedback before putting it out. As things get more expensive, people want more certainty."

But the data can't explain everything, says Harrington. "Take Love Island. Why is it a hit? It had been on before, there had been a million shows like it before. Suddenly it takes off. Why? No one knows."

Perhaps Mercurio should have kept his numbers to himself, says Jordan. "For a finale to drop by seven points isn't good at all. He had great ratings — he shouldn't have revealed that spectacular AI drop."

Caption: The fortunes of AC-12 and the Daleks depend on our enjoyment