Little Wendy Has a Big Idea For All You Peter Pans 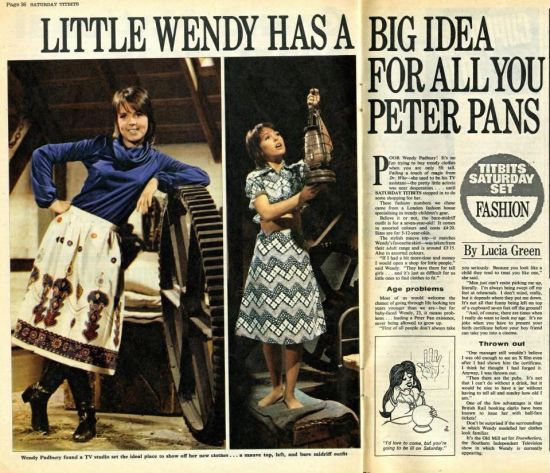 POOR Wendy Padbury! It's no fun trying to buy trendy clothes when you are only 5ft tall. Failing a touch of magic from Dr. Who - she used to be his TV assistant--the pretty little actress was near desperation ... until SATURDAY TITBITS stepped in to do some shopping for her.

These fashion numbers we chose came from a London fashion house specialising in trendy children's gear.

Believe it or not, the bare-midrift outfit is for a seven-year-old! It comes in assorted colours and costs £4.20. Sizes are for 5-12 year olds.

The stylish mauve to matches Wendy's favourite skin was taken from their adult range and is around £3.15. Also in assorted colours.

If I had a bit more time and money I would open a shop for little people, said Wendy. "They have them for all girls.. and it's just as difficult for us little ones to find clothes to fit."

Most of us would welcome the chance of going through life looking ten years younger than we are but for baby-faced Wendy, 23, it means problems leading a Peter Pan existence, never being allowed to grow up.

"First of all people don't always take you seriously. Here you look like a child they tend to treat you like one, she said.

"Men just can't resist picking me up, literally. I'm always being swept of my feet at rehearsals. I don't mind, really. but it depends where they put me down. It's not all that funny being left on top of a cupboard seven feet of the ground!

"And, of course, there are times when I really do want to look my age. It's no joke when you have to present your birth certificate before your boy friend can take you into a cinema.

One manager still wouldn't believe I was old enough to see an X film even after I had shown him the certificate I think he thought I had forged it. Anyway, I was thrown out.

Then there are the pubs. It's not that I can't do without a drink, but it would be nice to have a jar without having to tell all and wundry how old I

One of the few advanlass that British Rail booking clerks have been known to issue her with half-fare tickets!

It's the Old Mill set for Freewheelers, the Southern Independent Television show in which Wendy is currently appearing