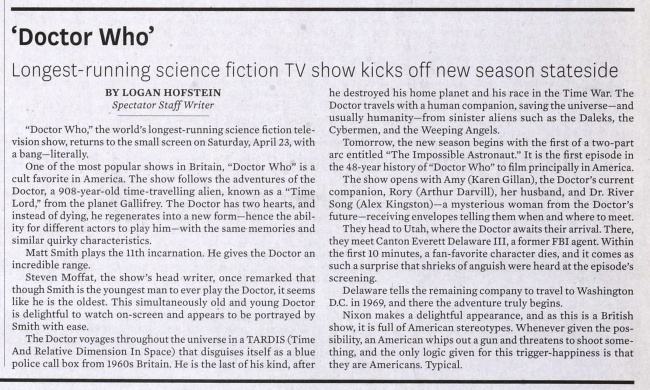 "Doctor Who," the world's longest-running science fiction television show, returns to the small screen on Saturday, April 23, with a bang—literally.

One of the most popular shows in Britain, "Doctor Who" is a cult favorite in America. The show follows the adventures of the Doctor, a 908-year-old time-travelling alien, known as a "Time Lord," from the planet Gallifrey. The Doctor has two hearts, and instead of dying, he regenerates into a new form—hence the ability for different actors to play him—with the same memories and similar quirky characteristics.

Matt Smith plays the 11th incarnation. He gives the Doctor an incredible range.

Steven Moffat, the show's head writer, once remarked that though Smith is the youngest man to ever play the Doctor, it seems like he is the oldest. This simultaneously old and young Doctor is delightful to watch on-screen and appears to be portrayed by Smith with ease.

The Doctor voyages throughout the universe in a TARDIS (Time And Relative Dimension In Space) that disguises itself as a blue police call box from 1960s Britain. He is the last of his kind, after he destroyed his home planet and his race in the Time War. The Doctor travels with a human companion, saving the universe—and usually humanity—from sinister aliens such as the Daleks, the Cybermen, and the Weeping Angels.

Tomorrow, the new season begins with the first of a two-part arc entitled "The Impossible Astronaut." It is the first episode in the 48-year history of "Doctor Who" to film principally in America.

The show opens with Amy (Karen Gillan), the Doctor's current companion, Rory (Arthur Darvill), her husband, and Dr. River Song (Alex Kingston)—a mysterious woman from the Doctor's future—receiving envelopes telling them when and where to meet.

They head to Utah, where the Doctor awaits their arrival. There, they meet Canton Everett Delaware III, a former FBI agent. Within the first 10 minutes, a fan-favorite character dies, and it comes as such a surprise that shrieks of anguish were heard at the episode's screening.

Delaware tells the remaining company to travel to Washington D.C. in 1969, and there the adventure truly begins.

Nixon makes a delightful appearance, and as this is a British show, it is full of American stereotypes. Whenever given the possibility, an American whips out a gun and threatens to shoot something, and the only logic given for this trigger-happiness is that they are Americans. Typical.