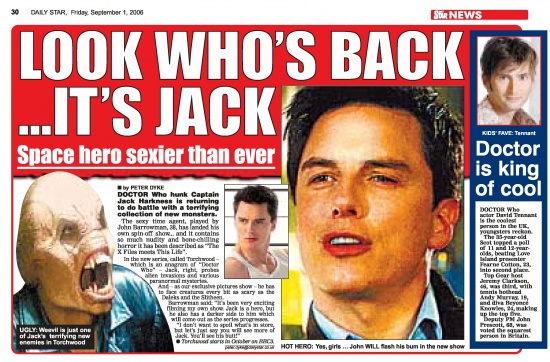 Space hero sexier than ever

DOCTOR Who hunk Captain Jack Harkness is returning to do battle with a terrifying collection of new monsters.

The sexy time agent, played by John Barrowman, 38, has landed his own spin-off show... and it contains so much nudity and bone-chilling horror it has been described as "The X Files meets This Life".

In the new series, called Torchwood - which is an anagram of "Doctor Who" - Jack, right, probes alien invasions and various paranormal mysteries.

And - as our exclusive pictures show - he has to face creatures every bit as scary as the Daleks and the Slitheen.

Barrowman said: "It's been very exciting filming my own show. Jack is a hero, but he also has a darker side to him which will come out as the series progresses.

"I don't want to spoil what's in store, but let's just say you will see more of Jack. You'll see his butt!"

Torchwood starts in October on BBC3.

Caption: UGLY: Weevil is just one of Jack's terrifying new enemies in Torchwood

Doctor is king of cool

DOCTOR Who actor David Tennant is the coolest person in the UK, youngsters reckon.