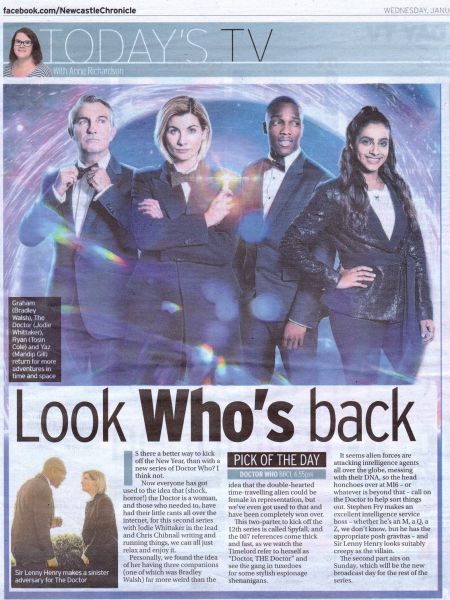 IS there a better way to kick off the New Year, than with a new series of Doctor Who? I think not.

Now everyone has got used to the idea that (shock, horror!) the Doctor is a woman, and those who needed to, have had their little rants all over the internet, for this second series with Jodie Whittaker in the lead and Chris Chibnall writing and running things, we can all just relax and enjoy it.

Personally, we found the idea of her having three companions (one of which was Bradley Walsh) far more weird than the idea that the double-hearted time-travelling alien could be female in representation, but we've even got used to that and have been completely won over.

This two-parter, to kick off the 12th series is called Spyfall, and the 007 references come thick and fast, as we watch the Timelord refer to herself as "Doctor, THE Doctor" and see the gang in tuxedoes for some stylish espionage shenanigans.

It seems alien forces are attacking intelligence agents all over the globe, messing with their DNA, so the head honchoes over at MI6 - or whatever is beyond that - call on the Doctor to help sort things out. Stephen Fry makes an excellent intelligence service boss - whether he's an M, a Q, a Z, we don't know, but he has the appropriate posh gravitas - and Sir Lenny Henry looks suitably creepy as the villain.

The second part airs on Sunday, which will be the new broadcast day for the rest of the series.