Look Who's hit the big time 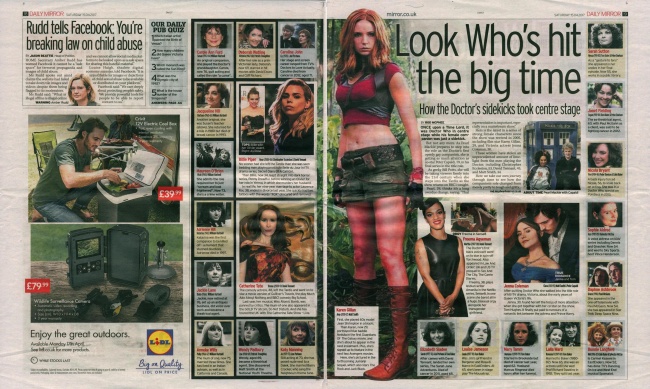 ONCE upon a Time Lord, it was Doctor Who in centre stage while his female companion was just a sidekick.

But not any more. As Pearl Mackie prepares to step into the role as the Doctor's first openly gay companion, she is getting as much attention as co-star Peter Capaldi, 59, in his final series in the title role.

As geeky Bill Potts, she will be taking viewers firmly into the 21st century when she steps into the Tardis as the show returns on BBC1 tonight. Pearl, 29, thinks it's a long overdue change, saying: "That representation is important, especially on a mainstream show."

Hers is the latest in a series of strong female characters since the show was revived in 2005, including film star Karen Gillan, 29, and Victoria actress Jenna Coleman, 30.

These women have stolen an unprecedented amount of limelight from the men playing the Doctor, including Christopher Eccleston, 53, David Tennant, 45, and Matt Smith, 34.

Here we take our own journey through time to see how the companion's role changed from merely pretty to tough and gritty...

An original companion, she played the Doctor's granddaughter. Carole, now 76, quit acting and called the role "a curse".

Another original, she was Susan's teacher (above). She returned for a role in 1980 but died of breast cancer in 1993.

She admits the role required her to just "scream and look frightened". Now 73, she's a crime writer.

Katarina was the first companion to be killed off - a moment that stunned devotees. Adrienne died in 1997.

Jackie, now retired at 76, set up an antiques business, did voice-over work and became a theatrical agent.

The mum of one, now 75, married three times. She has lived in an Indian ashram, as well as in California and Canada.

After her role as a prim Victorian lady, Deborah, now 69, starred in hit movies with David Essex and Cliff Richard.

Her stage and screen career ranged from TV's Doctors to Love Actually. Caroline died from cancer in 2012, aged 71.

Still acting at 70, she has posed nude next to a Dalek. She married Barry Crocker, who sang the Neighbours theme tune.

After cameo with David Tennant, landed her own series, The Sarah Jane Adventures. Died of cancer in 2011, aged 65.

Was Jim's girlfriend in Bergerac and Rosa di Marco in EastEnders. At 65, she's been in stage play The Mousetrap.

As a "gesture to fans" she appeared in her undies in her final episode. Now 55, she works in a public library.

The ex-theatrical agent, 63, with Paul McGann as a client, was said to be fighting cancer in 2012.

A back injury forced Nicola, 56, to scale back on acting. She was in a Doctor Who special on Pointless in 2013.

A voice actress on kids' series including Dennis and Gnasher. Now 54 and wed to Sky Sports host Vince Henderson.

She appeared in the one-off telemovie with Paul McGann. Now 54, she has appeared in Star Trek: Deep Space Nine.

No sooner had she left the Tardis than she was seen bedding men playing prostitute Belle du Jour in ITV drama series, Secret Diary Of A Call Girl.

Then Billie, now 34, leapt straight into dark horror series, Penny Dreadful, before winning an Olivier for her role in Yerma, in which she murders her husband.

In real life, her nine-year marriage to actor Laurence Fox, 38, ended in divorce last year. She quickly had two tattoos with the words "FOX" obscured and removed.

The Comedy actress, 48, left the Tardis and went on to star a movie version of Gulliver's Travels, the play Much Ado About Nothing and BBC1 comedy Big School.

Last year, her musical, Miss Atomic Bomb, was panned by critics. The mum-of-one also appeared in the GOLD TV sitcom, Do Not Distrub. And she has toured the UK with The Catherine Tate Show - Live.

The Doctor's first black assistant went on to star in spin-off Torchwood. Also appeared in Law And Order: UK and US TV prequel to Sex And The City, The Carrie Diaries.

First, she played 60s model Jean Shrimpton in a biopic.

Then Karen, now 29, portrayed blue baddie Nebula in the first Guardians Of The Galaxy movie, and she's about to appear in the next instalment. Plus, she's signed up to feature in the next two Avengers movies.

Here, she's pictured in the forthcoming Jumanji sequel, which also stars The Rock and Jack Black.

After quitting Doctor Who she walked into the title role of hit ITV drama, Victoria, about the early years of Queen Victoria's life.

Jenna, 30, found herself the focus of more attention when she got together with her co-star on the show, Tom Hughes. It finally put paid to rumours of a romantic link between the actress and Prince Harry.