Look Who is set to revamp the Doctor 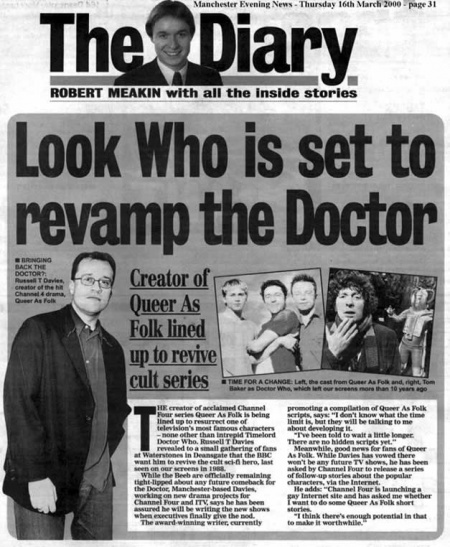 Robert Meakin with all the inside stories

Creator of Queer As Folk lined up to revive cult series

THE creator of acclaimed Channel Four series Queer As Folk is being lined up to resurrect one of television's most famous characters - none other than intrepid Timelord Doctor Who. Russell T Davies revealed to a small gathering of fans at Waterstones in Deansgate that the BBC want him to revive the cult sci-fi hero, last seen on our screens in 1988.

While the Beeb are officially remaining tight-lipped about any future comeback for the Doctor, Manchester based Davies, working on new drama projects for Channel Four and ITV, says he has been assured he will be writing the new shows when executives finally give the nod.

The award-winning writer, currently promoting a compilation of Queer As Folk scripts says: "I don't know what the time limit is, but they will he talking to me about developing it.

"I've been told to wait a little longer. There are no hidden scripts yet."

Meanwhile, good news for fans of Queer As Folk. While Davies has mood there won't be any future TV shows, he has been asked by Channel Four to release a series of follow-up stories about the popular characters, via the internet.

He adds: "Channel Four is launching a gay Internet site and has asked me whether I want to do some Queer As Folk short stories.

"I think there's enough potential in that to make it worthwhile."

Caption: Time for a change: Left, the cast from Queer as Folk and, right, Tom Baker as Doctor Who, who left our screens more than 10 years ago