Mad, sad and brilliant at her job 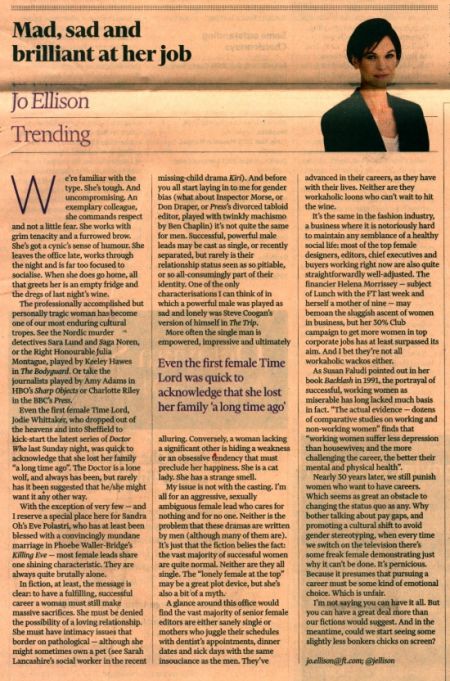 We're familiar with the type. She's tough. And uncompromising. An exemplary colleague, she commands respect and not a little fear. She works with grim tenacity and a furrowed brow. She's got a cynic's sense of humour. She leaves the office late, works through the night and is far too focused to socialise. When she does go home, all that greets her is an empty fridge and the dregs of last night's wine.

The professionally accomplished but personally tragic woman has become one of our most enduring cultural tropes. See the Nordic murder detectives Sara Lund and Saga Noren, or the Right Honourable Julia Montague, played by Keeley Hawes in The Bodyguard. Or take the journalists played by Amy Adams in HBO's Sharp Objects or Charlotte Riley in the BBC's Press.

Even the first female Time Lord, Jodie Whittaker, who dropped out of the heavens and into Sheffield to kick-start the latest series of Doctor Who last Sunday night, was quick to acknowledge that she lost her family "a long time ago". The Doctor is a lone wolf, and always has been, but rarely has it been suggested that he/she might want it any other way.

With the exception of very few — and l reserve a special place here for Sandra Oh's Eve Polastri, who has at least been blessed with a convincingly mundane marriage in Phoebe Waller-Bridge's Killing Eve — most female leads share one shining characteristic. They are always quite brutally alone.

In fiction, at least, the message is clear: to have a fulfilling, successful career a woman must still make massive sacrifices. She must be denied the possibility of a loving relationship. She must have intimacy issues that border on pathological — although she might sometimes own a pet (see Sarah Lancashire's social worker in the recent missing-child drama Kiri). And before you all start laying in to me for gender bias (what about Inspector Morse, or Don Draper, or Press's divorced tabloid editor, played with twinkly machismo by Ben Chaplin) it's not quite the same for men. Successful, powerful male leads may be cast as single, or recently separated, but rarely is their relationship status seen as so pitiable, or so all-consumingly part of their identity. One of the only characterisations I can think of in which a powerful male was played as sad and lonely was Steve Coogan's version of himself in The Trip.

More often the single man is empowered, impressive and ultimately alluring. Conversely, a woman lacking a significant other is hiding a weakness or an obsessive tendency that must preclude her happiness. She is a cat lady. She has a strange smell.

My issue is not with the casting. I'm all for an aggressive, sexually ambiguous female lead who cares for nothing and for no one. Neither is the problem that these dramas are written by men (although many of them are). It's just that the fiction belies the fact: the vast majority of successful women are quite normal. Neither are they all single. The "lonely female at the top" may be a great plot device, but she's also a bit of a myth.

A glance around this office would find the vast majority of senior female editors are either sanely single or mothers who juggle their schedules with dentist's appointments, dinner dates and sick days with the same insouciance as the men. They've advanced in their careers, as they have with their lives. Neither are they workaholic loons who can't wait to hit the wine.

It's the same in the fashion industry, a business where it is notoriously hard to maintain any semblance of a healthy social life: most of the top female designers, editors, chief executives and buyers working right now are also quite straightforwardly well-adjusted. The financier Helena Morrissey — subject of Lunch with the FT last week and herself a mother of nine — may bemoan the sluggish ascent of women in business, but her 30% Club campaign to get more women in top corporate jobs has at least surpassed its aim. And l bet they're not all workaholic wackos either.

As Susan Faludi pointed out in her book Backlash in 1991, the portrayal of successful, working women as miserable has long lacked much basis in fact. "The actual evidence — dozens of comparative studies on working and non-working women" finds that "working women suffer less depression than housewives; and the more challenging the career, the better their mental and physical health".

Nearly 30 years later, we still punish women who want to have careers. Which seems as great an obstacle to changing the status quo as any. Why bother talking about pay gaps, and promoting a cultural shift to avoid gender stereotyping, when every time we switch on the television there's some freak female demonstrating just why it can't be done. It's pernicious. Because it presumes that pursuing a career must be some kind of emotional choice. Which is unfair.

I'm not saying you can have it all. But you can have a great deal more than our fictions would suggest. And in the meantime, could we start seeing some slightly less bonkers chicks on screen?