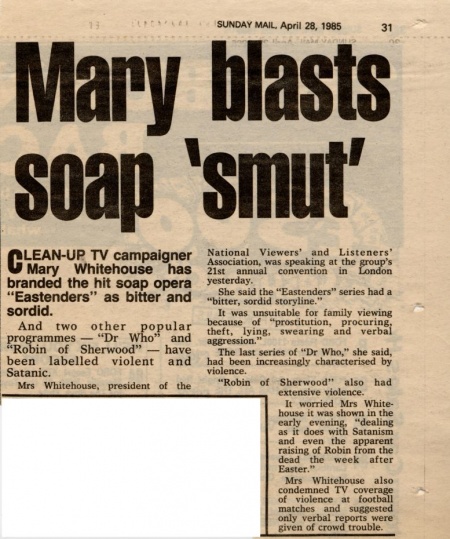 And two other popular programmes "Dr Who" and "Robin of Sherwood" have been labelled violent and Satanic.

Mrs Whitehouse, president of the National Viewers' and Listeners' Association, was speaking at the group's 21st annual convention in London yesterday.

She said the "Eastenders" series had a "bitter, sordid storyline."

It was unsuitable for family viewing because of "prostitution, procuring, theft, lying, swearing and verbal aggression."

The last series of "Dr Who," she said, had been increasingly characterised by violence.

It worried Mrs Whitehouse it was shown in the early evening, "dealing as it does with Satanism and even the apparent raising of Robin from the dead the week after Easter."

Mrs Whitehouse also condemned TV coverage of violence at football matches and suggested only verbal reports were given of crowd trouble.