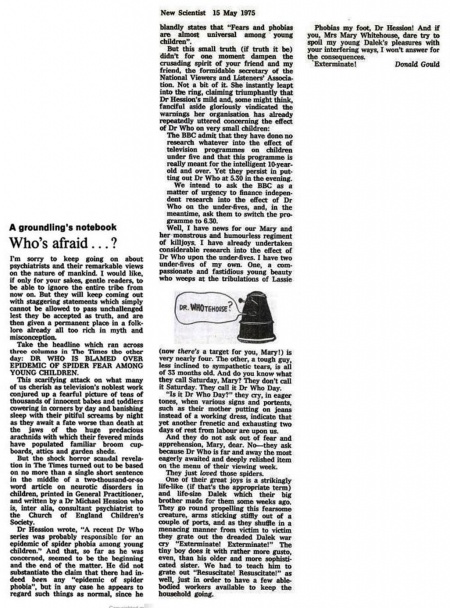 I'm sorry to keep going on about psychiatrists and their remarkable views on the nature of mankind. I would like, if only for your sakes, gentle readers, to be able to ignore the entire tribe from now on. But they will keep coming out with staggering statements which simply cannot be allowed to pass unchallenged lest they be accepted as truth, and are then given a permanent place in a folk. lore already all too rich in myth and misconception.

Take the headline which ran across throe columns in The Times the other day: DR WHO IS BLAMED OVER EPIDEMIC OF SPIDER FEAR AMONG YOUNG CHILDREN.

This scarifying attack on what many of us cherish as television's noblest work conjured up a fearful picture of tens of thousands of innocent babes and toddlers cowering in corners by day and banishing sleep with their pitiful screams by night as they await a fate worse than death at the jaws of the huge predacious arachnids with which their fevered minds have populated familiar broom cupboards, attics and garden sheds.

But the shock horror scandal revelation in The Times turned out to be based on no more than a single short sentence in the middle of a two-thousand-or-so word article on neurotic disorders in children, printed in General Practitioner, and written by a Dr Michael Hession who is, inter alia, consultant psychiatrist to the Church of England Children's Society.

Dr Hession wrote, "A recent Dr Who series was probably responsible for an epidemic of spider phobia among young children." And that, so far as he was concerned, seemed to be the beginning and the end of the matter. He did not substantiate the claim that there had indeed been any "epidemic of spider phobia", but in any case he appears to regard such things as normal, since he blandly states that "Fears and phobias are almost universal among young children".

But this small truth (if truth it be) didn't for one moment dampen the crusading spirit of your friend and my friend, the formidable secretary of the National Viewers and Listeners' Association. Not a bit of it. She instantly leapt into the ring, claiming triumphantly that Dr Hessian's mild and, some might think, fanciful aside gloriously vindicated the warnings her organisation has already repeatedly uttered concerning the effect of Dr Who on very small children:

The BBC admit that they have done no research whatever into the effect of television programmes on children under five and that this programme is really meant for the intelligent 10-year-old and over. Yet they persist in putting out Dr Who at 5.30 in the evening. We intend to ask the BBC as a matter of urgency to finance independent research into the effect of Dr Who on the under-fives, and, in the meantime, ask them to switch the programme to 6.30.

Well, I have news for our Mary and her monstrous and humourless regiment of killjoys. I have already undertaken considerable research into the effect of Dr Who upon the under-fives. I have two under-fives of my own. One, a compassionate and fastidious young beauty who weeps at the tribulations of Lassie (now there's a target for you, Mary!) is very nearly four. The other, a tough guy, less inclined to sympathetic tears, is all of 33 months old. And do you know what they call Saturday, Mary? They don't call it Saturday. They call it Dr Who Day.

"Is it Dr Who Day?" they cry, in eager tones, when various signs and portents, such as their mother putting on jeans instead of a working dress, indicate that yet another frenetic and exhausting two days of rest from labour are upon us. And they do not ask out of fear and apprehension, Mary, dear. No—they ask because Dr Who is far and away the most eagerly awaited and deeply relished item on the menu of their viewing week. They just loved those spiders.

One of their great joys is a strikingly life-like (if that's the appropriate term) and life-size Dalek which their big brother made for them some weeks ago. They go round propelling this fearsome creature, arms sticking stiffly out of a couple of ports, and as they shuffle in a menacing manner from victim to victim they grate out the dreaded Dalek war cry "Exterminate! Exterminate!" The tiny boy does it with rather more gusto, even, than his older and more sophisticated sister. We had to teach him to grate out "Resuscitate! Resuscitate!" as well, just in order to have a few able-bodied workers available to keep the household going.

Phobias my foot, Dr Hessian! And if you, Mrs Mary Whitehouse, dare try to spoil my young Dalek's pleasures with your interfering ways, I won't answer for the consequences.