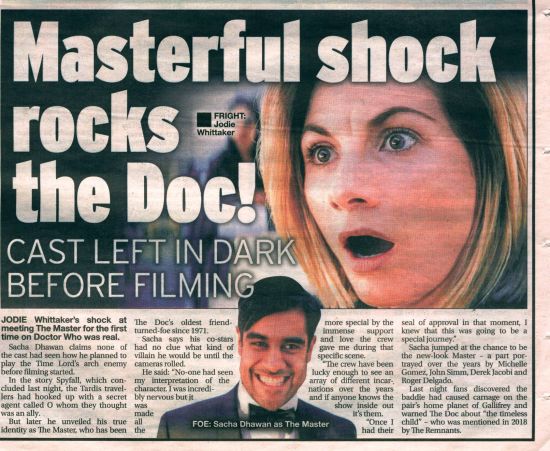 CAST LEFT IN DARK BEFORE FILMING

JODIE Whittaker's shock at meeting The Master for the first time on Doctor Who was real.

Sacha Dhawan claims none of the cast had seen how he planned to play the Time Lord's arch enemy before filming started.

In the story Spyfall, which concluded last night, the Tardis travellers had hooked up with a secret agent called 0 whom they thought was an ally.

But later he unveiled his true identity as The Master, who has been

The Doc's oldest friend-turned-foe since 1971.

Sacha says his co-stars had no clue what kind of villain he would be until the cameras rolled.

He said: "No-one had seen my interpretation of the character. I was incredibly nervous but it was made all the

more special by the immense support and love the crew gave me during that specific scene.

"The crew have been lucky enough to see an array of different incarnations over the years and if anyone knows the show inside out it's them. "Once I had their

seal of approval in that moment, I knew that this was going to be a special journey."

Sacha jumped at the chance to be the new-look Master - a part portrayed over the years by Michelle Gomez, John Simm, Derek Jacobi and Roger Delgado.

Last night fans discovered the baddie had caused carnage on the pair's home planet of Gallifrey and warned The Doc about "the timeless child" - who was mentioned in 2018 by The Remnants.