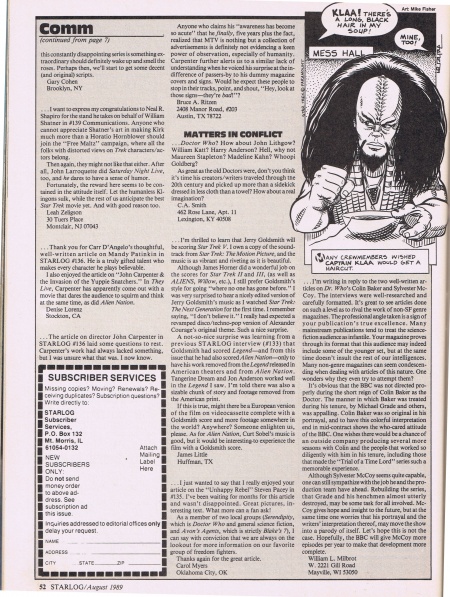 As great as the old Doctors were, don't you think it's time his creators/writers traveled through the 20th century and picked up more than a sidekick dressed in less cloth than a towel? How about a real imagination?

I'm writing in reply to the two well-written articles on Dr. Who's Colin Baker and Sylvester McCoy. The interviews were well-researched and carefully formatted. It's great to see articles done on such a level as to rival the work of non-SF genre magazines. The professional angle taken is a sign of your publication's true excellence. Many mainstream publications tend to treat the science-fiction audience as infantile. Your magazine proves through its format that this audience may indeed include some of the younger set, but at the same time doesn't insult the rest of our intelligences. Many non-genre magazines can seem condescending when dealing with articles of this nature. One wonders why they even try to attempt them?

It's obvious that the BBC was not directed properly during the short reign of Colin Baker as the Doctor. The manner in which Baker was treated during his tenure, by Michael Grade and others, was appalling. Colin Baker was so original in his portrayal, and to have this colorful interpretation end in mid-contract shows the who-cared attitude of the BBC. One wishes there would be a chance of an outside company producing several more seasons with Colin and the people that worked so diligently with him in his tenure, including those that made the "Trial of a Time Lord" series such a memorable experience.

Although Sylvester McCoy seems quite capable, one can still sympathize with the job he and the production team have ahead. Rebuilding the series, that Grade and his henchmen almost utterly destroyed, may be some task for all involved. McCoy gives hope and insight to the future, but at the same time one worries that his portrayal and the writers' interpretation thereof, may move the show into a parody of itself. Let's hope this is not the case. Hopefully, the BBC will give McCoy more episodes per year to make that development more complete.