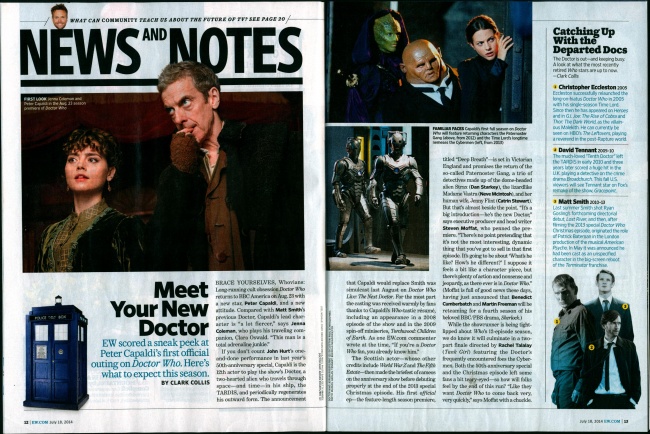 EW scored a sneak peek at Peter Capaldi's first official outing on Doctor Who. Here's what to expect this season.

If you don't count John Hurt's one-and-done performance in last year's 50th-anniversary special, Capaldi is the 12th actor to play the show's Doctor, a two-hearted alien who travels through space—and time—in his ship, the TARDIS, and periodically regenerates his outward form. The announcement that Capaldi would replace Smith was simulcast last August on Doctor Who Live: The Next Doctor. For the most part the casting was received warmly by fans thanks to Capaldi's Who-tastic résumé, including an appearance in a 2008 episode of the show and in the 2009 spin-off miniseries, Torchwood: Children of Earth. As one EW.com commenter wrote at the time, "If you're a Doctor Who fan, you already know him."

The Scottish actor—whose other credits include World War Z and The Fifth Estate—then made the briefest of cameos on the anniversary show before debuting properly at the end of the 2013 special Christmas episode. His first official ep—the feature-length season premiere, titled "Deep Breath"—is set in Victorian England and promises the return of the so-called Paternoster Gang, a trio of detectives made up of the dome-headed alien Strax (Dan Starkey), the lizardlike Madame Vastra (Neve McIntosh), and her human wife, Jenny Flint (Catrin Stewart). But that's almost beside the point. "It's a big introduction—he's the new Doctor," says executive producer and head writer Steven Moffat, who penned the premiere. "There's no point pretending that it's not the most interesting, dynamic thing that you've got to sell in that first episode. It's going to be about 'What's he like? How's he different?' I suppose it feels a bit like a character piece, but there's plenty of action and nonsense and jeopardy, as there ever is in Doctor Who." (Moffat is full of good news these days, having just announced that Benedict Cumberbatch and Martin Freeman will be reteaming for a fourth season of his beloved BBC/PBS drama, Sherlock.)

While the showrunner is being tightlipped about Who's 12-episode season, we do know it will culminate in a two-part finale directed by Rachel Talalay (Tank Girl) featuring the Doctor's frequently encountered foes the Cyber-men. Both the 50th-anniversary special and the Christmas episode left some fans a bit teary-eyed—so how will folks feel by the end of this run? "Like they want Doctor Who to come back very, very quickly," says Moffat with a chuckle.

Caption: FIRST LOOK Jenna Coleman and Peter Capaldi in the Aug. 23 season premiere of Doctor Who

Caption: FAMILIAR FACES Capaldi's first full season on Doctor Who will feature returning characters the Paternoster Gang (above, from 2012) and the Time Lord's longtime nemeses the Cybermen (left, from 2013)

Catching Up With the Departed Docs

The Doctor is out—and keeping busy. A look at what the most recently retired Who stars are up to now. —Clark Collis

Eccleston successfully relaunched the long-on-hiatus Doctor Who in 2005 with his single-season Time Lord. Since then he has appeared on Heroes and in G.I. Joe: The Rise of Cobra and Thor: The Dark World, as the villainous Malekith. He can currently be seen on HBO's The Leftovers, playing a reverend in the post-Rapture world.

2 David Tennant 2005-10 The much-loved "Tenth Doctor" left the TARDIS in early 2010 and three years later scored a huge hit in the U.K. playing a detective on the crime drama Broadchurch. This fall U.S. viewers will see Tennant star on Fox's remake of the show, Gracepoint.

Last summer Smith shot Ryan Gosling's forthcoming directorial debut, Lost River, and then, after filming the 2013 special Doctor Who Christmas episode, originated the role of Patrick Bateman in the London production of the musical American Psycho. In May it was announced he had been cast as an unspecified character in the big-screen reboot of the Terminator franchise.