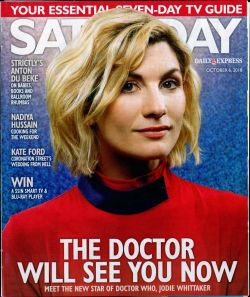 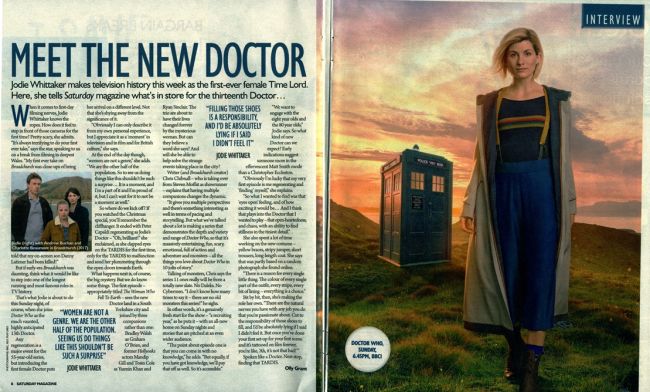 When it conies to first-day filming nerves, Jodie Whittaker knows the ropes. How does it feel to step in front of those cameras for the first time? Pretty scary, she admits. "It's always terrifying to do your first ever take," says the star, speaking to us on a break from filming in deepest Wales. "My first ever take on Broadchurch was close-ups of being told that my on-screen son Danny Latimer had been killed!"

But if early-era Broadchurch was daunting, think what it would be like to step into one of the longest running and most famous roles in TV history.

That's what Jodie is about to do this Sunday night, of course, when she joins Doctor Who as the much vaunted, highly anticipated 13th Doctor.

Any regeneration is a major event for the 55-year-old series, but introducing the first female Doctor puts her arrival on a different level. Not that she's shying away from the significance of it.

"Obviously I can only describe it from my own personal experience, but I appreciate it as a 'moment' in television and in film and for British culture; she says.

At the end of the day though, "women are not a genre, she adds. "We are the other half of the population. So to see us doing things like this shouldn't be such a surprise ... It is a moment, and I'm a part of it and I'm proud of it, but I can't wait for it to not be a moment as well.

So where do we kick off? If you watched the Christmas special, you'll remember the cliffhanger. It ended with Peter Capaldi regenerating as Jodie's Doctor - "Oh, brilliant!" she exclaimed, as she clapped eyes on the TARDIS for the first time, only for the TARDIS to malfunction and send her plummeting through the open doors towards Earth.

What happens next is, of course, the big mystery. But we do know some things. The first episode appropriately titled The Woman Who Fell To Earth - sees the new Doctor land in a South Bradley Walsh as Graham O'Brien, and former Hollyoaks actors Mandip Gill and Tosin Cole as Yasmin Khan and Ryan Sinclair. The trio are about to have their lives changed forever by the mysterious woman. But can they believe a word she says? And will she be able to help solve the strange events taking place in the city?

Writer (and Broadchurch creator) Chris Chibnall - who is taking over from Steven Moffat as showrunner - explains that having multiple companions changes the dynamic.

"It gives you multiple perspectives and there's something interesting as well in terms of pacing and storytelling. But what we've talked about a lot is making a series that demonstrates the depth and variety and range of Doctor Who, so that it's massively entertaining, fun, scary, emotional, full of action and adventure and monsters - all the things you love about Doctor Who in 10 jolts of story."

Talking of monsters, Chris says the series 11 ones really will be from a totally new slate. No Daleks. No Cybermen. "I don't know how many times to say it - there are no old monsters this series!" he sighs.

In other words, it's a genuinely fresh start for the show - "a recruiting year," as he puts it - with an all-new home on Sunday nights and stories that are pitched at an even wider audience.

"The point about episode one is that you can come in with no knowledge," he adds. "But equally, if you have got knowledge, we'll pay that off as well. So it's accessible?

"We want to engage with the eight year olds and the 80 year olds," Jodie says. So what kind of new Doctor can we expect? Early indications suggest someone more in the effervescent Matt Smith mode than a Christopher Eccleston.

"Obviously I'm lucky that my very first episode is me regenerating and 'finding' myself," she explains.

"So what I wanted to find was that eyes open feeling, and of how exciting it would be ... And I think that plays into the Doctor that I wanted to play that open-heartedness, and chaos, with an ability to find stillness in the tiniest detail."

She also spent a lot of time working on the new costume - yellow braces, stripy jumper, short trousers, long-length coat. She says that was partly based on a random photograph she found online.

"There is a reason for every single little thing. The colour of every single part of the outfit, every stripe, every bit of lining - everything is a choice

Bit by bit, then, she's making the role her own. "There are the natural nerves you have with any job you do that you're passionate about Cut to the responsibility of those shoes to fill, and I'd be absolutely lying if I said I didn't feel it But once you've done your first set-up for your first scene and it's tattooed on film forever, you're like, Ah, it's not that bad!'"

Spoken like a Doctor. Next stop, finding that TARDIS.