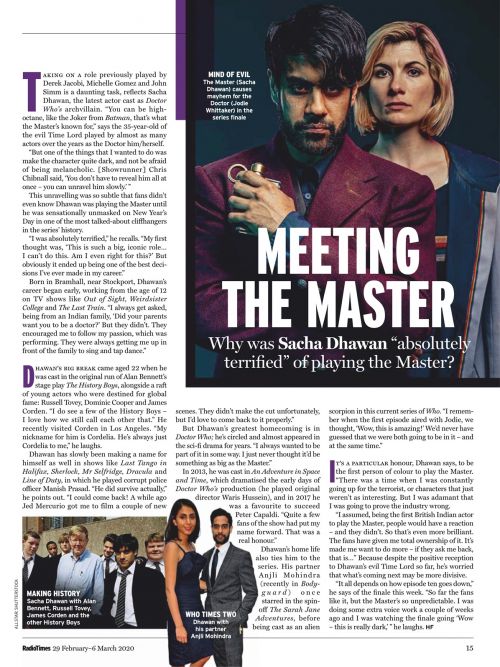 Why was Sacha Dhawan "absolutely terrified" of playing the Master?

TAKING ON A role previously played by Derek Jacobi, Michelle Gomez and John Simm is a daunting task, reflects Sacha Dhawan, the latest actor cast as Doctor Who's archvillain. "You can be high-octane, like the Joker from Batman, that's what the Master's known for," says the 35-year-old of the evil Time Lord played by almost as many actors over the years as the Doctor him/herself.

"But one of the things that I wanted to do was make the character quite dark, and not be afraid of being melancholic. [Showrunner] Chris Chibnall said, 'You don't have to reveal him all at once - you can unravel him slowly? "

This unravelling was so subtle that fans didn't even know Dhawan was playing the Master until he was sensationally unmasked on New Year's Day in one of the most talked-about cliffhangers in the series' history.

"I was absolutely terrified;' he recalls. "My first thought was, 'This is such a big, iconic role... I can't do this. Am I even right for this?' But obviously it ended up being one of the best decisions I've ever made in my career?'

Born in Bramhall, near Stockport, Dhawan's career began early, working from the age of 12 on TV shows like Out of Sight, Weirdsister College and The Last Train. "I always get asked, being from an Indian family, 'Did your parents want you to be a doctor?' But they didn't. They encouraged me to follow my passion, which was performing. They were always getting me up in front of the family to sing and tap dance."

DHAWAN'S BIG BREAK came aged 22 when he was cast in the original run of Alan Bennett's stage play The History Boys, alongside a raft of young actors who were destined for global fame: Russell Tovey, Dominic Cooper and James Corden. "I do see a few of the History Boys I love how we still call each other that." He recently visited Corden in Los Angeles. "My nickname for him is Cordelia. He's always just Cordelia to me," he laughs.

Dhawan has slowly been making a name for himself as well in shows like Last Tango in Halifax, Sherlock, Mr Selfridge, Dracula and Line of Duty, in which he played corrupt police officer Manish Prasad. "He did survive actually;' he points out. "I could come back! A while ago Jed Mercurio got me to film a couple of new scenes. They didn't make the cut unfortunately, but I'd love to come back to it properly."

But Dhawan's greatest homecoming is in Doctor Who; he's circled and almost appeared in the sci-fi drama for years. "I always wanted to be part of it in some way. I just never thought it'd be something as big as the Master?'

In 2013, he was cast in An Adventure in Space and Time, which dramatised the early days of Doctor Who's production (he played original director Waris Hussein), and in 2017 he was a favourite to succeed Peter Capaldi. "Quite a few fans of the show had put my name forward. That was a real honour."

Dhawan's home life also ties him to the series. His partner Anjli Mohindra (recently in Bodyguard) once starred in the spinoff The Sarah Jane Adventures, before being cast as an alien scorpion in this current series of Who. "I remember when the first episode aired with Jodie, we thought, 'Wow, this is amazing!' We'd never have guessed that we were both going to be in it - and at the same time?'

IT'S A PARTICULAR honour, Dhawan says, to be the first person of colour to play the Master. "There was a time when I was constantly going up for the terrorist, or characters that just weren't as interesting. But I was adamant that I was going to prove the industry wrong.

"I assumed, being the first British Indian actor to play the Master, people would have a reaction - and they didn't. So that's even more brilliant. The fans have given me total ownership of it. It's made me want to do more - if they ask me back, that is..." Because despite the positive reception to Dhawan's evil Time Lord so far, he's worried that what's corning next may be more divisive.

"It all depends on how episode ten goes down;' he says of the finale this week. "So far the fans like it, but the Master's so unpredictable. I was doing some extra voice work a couple of weeks ago and I was watching the finale going 'Wow - this is really dark;" he laughs.

WHO TIMES TWO Dhawan with his partner Anjli Mohindra