More Dr. Who and actors return for a new special 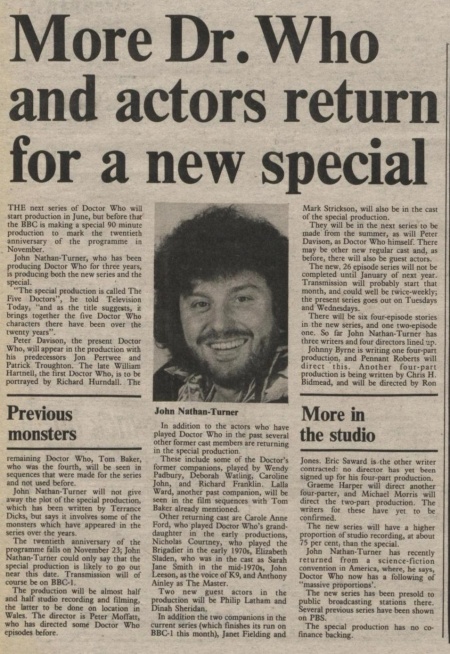 THE next series of Doctor Who will start production in June, but before that the BBC is making a special 90 minute production to mark the twentieth anniversary of the programme in November.

John Nathan-Turner, who has been producing Doctor Who for three years, is producing both the new series and the special.

The special production is called "The Five Doctors", he told Television Today, "and as the title suggests, it brings together the five Doctor Who characters there have been over the twenty years".

Peter Davison, the present Doctor Who, will appear in the production with his predecessors Jon Pertwee and Patrick Troughton. The late William Hartnell, the first Doctor Who, is to be portrayed by Richard Hurndall. The remaining Doctor Who, Tom Baker, who was the fourth, will be seen sequences that were made for the series and not used before.

John Nathan-Turner will not give away the plot of the special production, which has been written by Terrance Dicks, but says it involves some of the monsters which have appeared in the series over the years.

The twentieth anniversary of the programme falls on November 23; John Nathan-Turner could only say that the special production is likely to go out near this date. Transmission will of course be on BBC-1.

The production will be almost half and half studio recording and filming, the latter to be done on location in Wales. The director is Peter Moffatt, who has directed some Doctor Who episode, before.

In addition to the actors who have played Doctor Who in the past several other former cast members are returning in the special production.

These include some of the Doctor's former companions, played by Wendy Padbury, Deborah Watling, Caroline John, and Richard Franklin. Lalla Ward, another past companion, will be seen in the film sequences with Tom Baker already mentioned.

Other returning cast are Carole Anne Ford, who played Doctor Who's granddaughter in the early productions, Nicholas Courtney, who played the Brigadier in the early 1970s, Elizabeth Sladen, who was in the cast as Sarah Jane Smith in the mid-1970s, John Leeson, as the voice of K9, and Anthony Ainley as The Master.

In addition the two companions in the current series (which finishes its run on BBC-1 this month), Janet Fielding and Mark Strickson, will also be in the cast of the special production.

They will be in the next series to be made from the summer, as will Peter Doctor as Doctor Who himself. There may be other new regular cast and, as before, there will also be guest actors.

The new, 26 episode series will not be completed until January of next year. Transmission will probably start that month, and could well be twice-weekly; the present series goes outt on Tuesdays and Wednesdays.

There will be six four-episode stories in the new series, and one two-episode. So far John Nathan-Turner three writers and four directors lined up. Johnny Byrne is writing one four-part production, and Pennant Roberts will direct this. Another four-part production is being written by Chris H. Bidmead, and will be directed by Ron Jones. Eric Saward is the other writer contracted: no director has yet been signed up for his four-part production.

Graeme Harper will direct another four-parter, and Michael Morris will direct the two-part production. The writers for these have yet to be confirmed.

The new series will have a higher proportion of studio recording, at about 255 per cent, than the special.

John Nathan-Turner has recently returned from a science-fiction convention in America, where, he says, Doctor Who now has a following of "massive proportions."

The new series has been presold to public broadcasting stations there. Several previous series have been shown on PBS.

The special production has no co-finance backing.